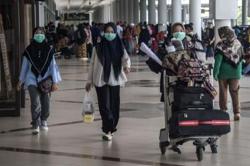 A woman receives a shot of Sinovac's COVID-19 vaccine during a mass vaccination for traders and workers at a shopping mall in Tangerang, Indonesia, Monday, March 1, 2021. - AP

The drop was because the main markets of countries where tourists coming to Indonesia are still implementing lockdown policies due to the Covid-19 pandemic, head of Indonesia's Central Agency of Statistics Suhariyanto told a virtual press conference on Monday.

Suhariyanto said China, Malaysia, Singapore and Australia are Indonesia's main tourist markets, and 68 per cent of foreign tourists visited Indonesia by land, 31 per cent by sea and 1 per cent by air. Indonesia also posted an inflation of 0.10 per cent in February, down from 0.26 per cent in the previous month, the Central Agency of Statistics announced on Monday.

The agency's head Suhariyanto said the inflation occurred due to the impact of the Covid-19 pandemic on the Indonesian and world economies.

According to the ministry, 9,212 more people were discharged from hospitals, bringing the total number of recovered patients to 1,151,915.