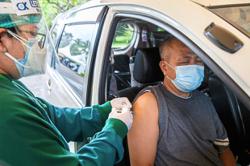 The programme, which started Sunday on the resort island of Bali, is the first to be done in South-East Asia, Grab Indonesia President Ridzki Kramadibrata said in a virtual news briefing.

Indonesia has made it mandatory for eligible citizens to take a shot. The nation is aggressively rolling out a mass-inoculation drive as it struggles to contain the largest coronavirus outbreak in South-East Asia.

It plans to vaccinate 70 million people by August, roughly a third of the total target of 181.5 million for the public campaign.

"We need to collaborate with the private sector to speed up the vaccine campaign,” Health Minister Budi Gunadi Sadikin said at the briefing.

The Grab vaccine center in Bali is prepared to dispense 840 shots a day, for a total of 5,000 vaccinations in a week, the company said in a statement. The first center plans to vaccinate 2,500 drivers in the transportation sector, including Grab drivers and delivery-partners and 2,500 public sector workers in tourism in Bali. More drive-thru centers will be set up soon in various cities, Kramadibrata said.

Grab to Subsidize Some Covid Vaccinations for Drivers, Partners

As of Saturday, 1.47 million people in Indonesia have received their first dose of the Sinovac Biotech Ltd. vaccine, while over 980,000 have taken their second. Around 1.3 million people in the country have been infected and more than 35,000 died from the virus. - Bloomberg
Article type: metered
User Type: anonymous web
User Status:
Campaign ID: 46
Cxense type: free
User access status: 3 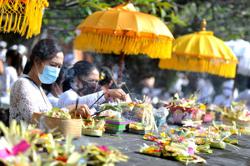