GUIYANG, Feb. 28 (Xinhua): China has launched a special operation to build a stronger political and legal work team and rectify problems existing in the team.

Guo Shengkun, a member of the Political Bureau of the Communist Party of China (CPC) Central Committee, on Saturday urged efforts to get rid of rotten apples in the team, rectify deep-rooted problems, and build a political and legal work team that people trust and can rely on.

Guo, who heads the Commission for Political and Legal Affairs of the CPC Central Committee, made the remarks at a meeting for the initiation of the operation.

A total of 3.4 million people are engaged in tea-related industries in the province, with their annual per capita income hitting 12,351 yuan last year.

Tea has become the leading agricultural export product in Guizhou. Last year, the province exported 6,577.7 tonnes of tea leaves. The total export value was over US$230 million, up 91.7 per cent year on year. 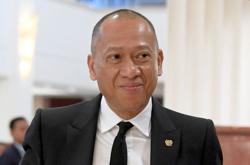