On the move: Junta supporters marching with banners and flags during the rally in Yangon. — Reuters

MEMBERS of a group supporting Myanmar’s military junta attacked and injured people protesting against the army’s Feb 1 seizure of power that ousted the elected government of Aung San Suu Kyi. At least several people were injured in the attacks in Myanmar’s largest city.

The chaos complicates an already intractable standoff between the military and a protest movement that has been staging large-scale demonstrations daily to have Suu Kyi’s government restored to power.

Fellow members of the Association of South-East Asian Nations are urging Myanmar’s military to make some concessions to help ease tensions.

The 10-country regional grouping views dialogue with the generals as a more effective method of achieving compromises than more confrontational methods, such as the sanctions often advocated by Western nations.

Photos and videos on social media showed the attacks and injured people in downtown Yangon as police stood by without intervening. The attackers fired slingshots and carried iron rods, knives and other sharp implements.

A widely-circulated video showed one man stabbed in front of an office building near a major downtown intersection on the road to Sule Pagoda, a major venue for anti-coup protests. The number of injured people and their condition could not immediately be learned.

According to accounts and photos posted on social media, the situation began with a march of hundreds of people in support of the coup. They carried banners in English with the slogans “We Stand With Our Defence Services” and “We Stand With State Administration Council”, which is the official name of the new junta.

English has been widely used for signs and posters and online memes by the anti-coup demonstrators in an evident effort to win international support.

Reports said the pro-military marchers were jeered by bystanders near the city’s Central Railway station and responded by firing slingshots, throwing stones at them and then chasing them down. Video shows pro- and anti-coup crowds at that location.

The meeting was part of Marsudi’s efforts to coordinate a regional response to the situation in Myanmar.

“We asked all parties to exercise restraint... to avoid casualties and bloodshed, ” Marsudi said in a virtual news conference after her return to Indonesia. — Agencies 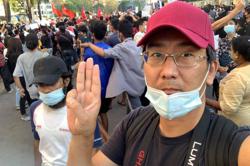