A participant flashes a three-fingered salute during a rally in Tokyo on Feb 14, 2021 - AP

YANGON (Reuters): Myanmar police detained a Japanese freelance journalist at a protest in the commercial capital of Yangon, a colleague said on Friday (Feb 26), in the first detention of a foreign reporter since the military coup on Feb 1.

Yuki Kitazumi, who runs a media production company and used to be a journalist for the Japanese business daily, the Nikkei, according to his Facebook page and interviews with online media, was arrested on Friday morning.

"According to witnesses, he was beaten on his head but he was wearing a helmet so it didn't cause him much harm. I have contacted the embassy and haven't heard much more information yet," said Kitazumi's Myanmar colleague Linn Nyan Htun in a Facebook post announcing his arrest.

"I didn't witness it but I received a message from him via messenger app around 11.30am that he got arrested. After that I lost connection with him," he told Reuters by phone.

Kitazumi's phone listed on the website of his production company was unreachable. 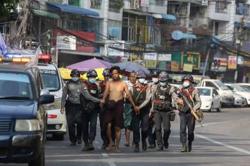