BANGKOK (The Nation/ANN): The number of new Covid-19 cases in Thailand fell below 50 for the first time since the second wave hit the country in December last year, with 45 people testing positive on Friday (Feb 26).

Of them, eight are returnees in quarantine facilities, and 32 picked up the infection while visiting high-risk areas.

Samut Sakhon led with 14 cases, followed by five in Nakhon Nayok, three each in Bangkok, Chai Nat and Nakhon Pathom, two in Saraburi and one each in Prachuap Khiri Khan and Samut Prakan.

Meanwhile, proactive testing led to the discovery of five cases, all in Samut Sakhon.Of the infected travellers, two are from France and one each from Germany, Bangladesh, Netherlands, Pakistan, UK and Kuwait.

Meanwhile, 218 patients have recovered and been discharged.

As of Friday, the number of confirmed cases in Thailand had risen to 25,809. Of these, 23,056 had been contracted locally, including 14,485 who were found via proactive testing, while 2,753 were returnees.

So far, 24,952 have recovered and been discharged, 774 are still being treated and the death toll remains unchanged at 83.

Thailand ranks 114th in the global list of most cases, which is topped by the US with 29.05 million, followed by India with 11.06 million, Brazil 10.39 million, Russia 4.21 million and the United Kingdom 4.15 million. - The Nation/Asia News Network 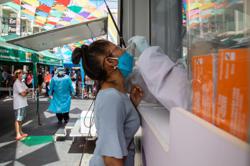