It will fly in this preset orbit for about three months before releasing its landing capsule, the administration said in a brief statement.

The spacecraft, which has entered a crucial stage in China's first interplanetary exploration mission after seven months of lengthy space voyage, conducted its third near-Mars deceleration maneuver at 6.29am and then moved into an orbit with a perigee of about 280 kilometres.

All the seven mission payloads on the probe's orbiter will be gradually activated during the probe's three-month stay in the orbit to carry out scientific tasks and also to observe and analyze the landforms and weathers of the optimal landing site, according to the CNSA.

The 5-metric tonne probe, which consists of two major parts -- the orbiter and the landing capsule- - has flown for 215 days and about 475 million km on its journey to Mars. The average flight speed was about 100,000 km per hour.

Currently, it is about 212 million km away from Earth, the space administration said.

The Tianwen 1 mission's ultimate goal is to land a rover in May or June on the southern part of Mars' Utopia Planitia-a large plain within Utopia, the largest recognised impact basin in the solar system-to conduct scientific surveys.

Tianwen 1 is the world's 46th Mars exploration mission since October 1960, when the former Soviet Union launched the first Mars-bound spacecraft. Only 18 of those missions were successful. - China Daily/Asia News Network 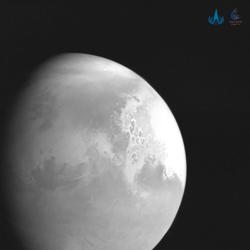