Yamamoto (second from right) commended Dr Mohd Isham (second from left) and his team of frontline health workers for their hard work and dedication to keep the people of this country safe. - BB

During a reception hosted by the Embassy of Japan in Brunei Darussalam on Wednesday (Feb 17) at the The Rizqun International Hotel, in conjunction with the Emperor of Japan’s 61st birthday, Yamamoto said, “Under the strong leadership of His Majesty Sultan Hassanal Bolkiah, the response in Brunei has been extremely effective.

“We can’t be more grateful to Minister of Health Dr Mohd Isham Jafaar, his team and the frontline health workers, for their hard work and dedication to keep the people of this country safe.”

The ambassador also said that Japan is sparing no efforts to support other countries in tackling the pandemic, with the country increasing its commitment and contributing US$200 million to the Covax Advance Market Commitment, while extending full support to ensure equitable access to vaccines for all.

“Japan is also working closely with Asean, and has declared that US$50 million would be allocated for establishing the Asean Centre for Public Health Emergencies and Emerging Diseases. And we have committed an additional US$1 million to the Covid-19 Asean Response Fund, ” he added.

“I strongly believe we, as a humankind, will overcome this calamity soon. As Arnold J Toynbee, a prominent historian, once said, our civilisations grow by successfully responding to challenges.”

Congratulating Brunei on assuming the Asean Chair for 2021, the ambassador noted that the theme ‘We Care, We Prepare, We Prosper’ is very timely and relevant.

“Now we focus on caring for those who suffer medically or economically out of Covid, but at the same time, we have to prepare now for post-Covid prosperity. Japan fully supports Brunei’s effort as the Chair of Asean this year.

“By overcoming these difficult circumstances, Japan would like to make this coming summer a special one where the government, along with the International Olympic Committee (IOC), is fully committed to holding the Tokyo Olympic and Paralympic Games as scheduled, while attaching utmost priority to the health and safety of all athletes and audiences; and warmly welcome Bruneian athletes in Tokyo, ” he said.

Yamamoto also highlighted that innovation is the key for post-pandemic prosperity and addressing climate change exactly requires innovations and inventions.

On this note, he disclosed, “Prime Minister Yoshihide Suga announced that Japan will strive to reduce its greenhouse gas emissions to net-zero by 2050 to realise a carbon-neutral society. Japan will work together with other countries, including Brunei, and lead international efforts at this year’s COP26 and beyond, to realise a decarbonised world.

“In this connection, I’d like to touch upon Japan’s ambitious efforts in Brunei.

"In 2020, an association of Japanese companies called Advanced Hydrogen Energy Chain Association (AHEAD), in their Demonstration Project, successfully produced and transported hydrogen from Brunei to Japan. Hydrogen is a clean, efficient energy source for the next generation.

“Another green energy source, solar power, has been supported here in a collaboration between the Government of Brunei Darussalam and Mitsubishi Corporation. Japan will continue to support Brunei in its efforts to diversify its economy and create a green society.”

On the sports, cultural and educational exchange between Brunei and Japan, he said, “Despite the various impediments, many programmes and activities have still taken place, even virtually.”

Earlier, Yamamoto noted that the Emperor of Japan’s birthday falls on the same day as Brunei Darussalam’s National Day on Feb 23, saying, “This coincidence is a beautiful symbol of our countries’ friendship.”

He also acknowledged the affection and respect that many young Bruneians show for Japan.

“I hope the day will come soon when we can resume and expand our exchanges, including in particular, youth on whom our future depends, ” he said. - Borneo Bulletin/Asia News Network 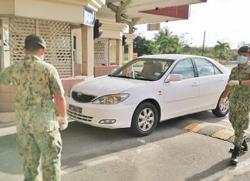