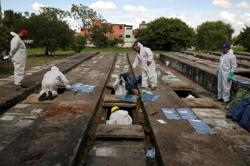 Two new deaths were reported, taking fatalities to 82, with overall cases at 24,714, the majority of which have come in the past two months.

The South African variant was found in a Thai man who had travelled from Tanzania and was undergoing the mandatory quarantine for all arrivals from abroad, the taskforce said at a briefing.

South Africa halted the planned rollout last week of AstraZeneca's coronavirus vaccine, which Thailand will use for its mass immunisation programme, after data showed it gave minimal protection against mild-to-moderate infection.

South African scientists say there is no clear evidence the variant is associated with more severe disease or worse outcomes, but say it spreads faster.

A World Health Organization panel last week said that AstraZeneca's vaccine should be deployed widely, however, including in countries where the South African variant may reduce its efficacy.

Meanwhile, The Nation Thailand, reported that Dr Opas Karnkawinpong, director-general of DDC, said on Sunday this was the first case found in Thailand.

The 41-year-old Thai patient has an asthmatic congenital disease, high blood pressure, and is overweight, he said.

According to his travel history, he had spent two months working in Tanzania to buy gemstones and said that people in that area rarely wore face masks.

On Jan 29, the patient arrived at Suvarnabhumi Airport after visiting Ethiopia and was quarantined in a state facility. On February 3, a positive Covid-19 test result was found and delivered a genetic transcription test sample since he was travelling from Africa. On February 12, the results were found to be a South African species.

"I assure that the South African species, found in state quarantine, hasn’t spread to any community." Dr Opas said.

Guidelines for screening people coming from countries with South African mutated virus have been adjusted to be more sensitive, such as collecting samples immediately upon arrival in Thailand, screening and sending people with symptoms and history of risk to the hospital.

There is also a system to monitor new species before travellers leave the hospital. The strict screening will help prevent this species from spreading to the community.

Dr Opas said that the world now had an eye on the South African strain of Covid-19.

However, there were no other strains found to make the symptoms more severe.

In Thailand, it was found that the strains that spread in the country were a G species which does not have more severe symptoms, but it spreads more easily compared to other species.
Article type: metered
User Type: anonymous web
User Status:
Campaign ID: 46
Cxense type: free
User access status: 3