TOKYO, Feb 14 (Bloomberg): Recovery efforts are underway in northern Japan after an earthquake of magnitude-7.3 struck off Fukushima, leaving more than a hundred injured and causing temporary power outages across the region.

Around 124 were injured in the earthquake but no deaths were reported, according to public broadcaster NHK. Energy companies reported no damage to nuclear power plants in the region.

About 13 thermal power plants in Fukushima and Miyagi stayed offline after the earthquake, with some expected to restart on Sunday.

The earthquake occurred less than a month before the 10-year anniversary of the 2011 earthquake and tsunami that led to a meltdown at three nuclear units of Fukushima Dai-ichi nuclear plant and left about 19,000 people dead or missing. NHK reported, citing Tokyo Electric Power Co., that there was a minor overflow of water from the pool that stores used nuclear fuels at the Fukushima nuclear plants, but no uncontrolled radiation activities were seen. Prime Minister Yoshihide Suga said at a press conference on Sunday that no incidents were reported from the nuclear power plants.

More than 830,000 households in the Tohoku and Kanto regions experienced power outages, but supply resumed in most areas by Sunday morning. NTT Docomo Inc. said some of its service areas in Tohoku were affected but operations had returned to normal as of Sunday. Some areas in Fukushima are still without water supply, a local paper reported.

East Japan Railway Co. said part of its high-speed bullet and local train line services will remain suspended until Monday due to damages to electrical lines. East Nippon Expressway Co. said it has closed a line connecting Fukushima and Miyagi due to a landslide. 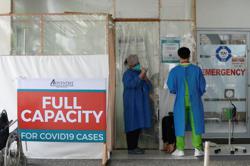