BEIJING (Xinhua): Chinese President Xi Jinping said Monday (Feb 7) that China-Vietnam relations are standing at a new historical starting point and China is willing to work with Vietnam to push for steady and enduring development of bilateral ties.

China, Xi added, stands ready to join forces with Vietnam to strengthen strategic communication, increase political mutual trust, and maintain the political guidance role of and close communication between the leaderships of the two parties.

Xi congratulated Trong again on his election as the general secretary of the CPV Central Committee, noting that the successful convention of the 13th National Congress of the CPV, which has set development goals for the new stage, bears great significance.

He expressed the belief that under the leadership of the new CPV Central Committee headed by Trong, the CPV and the Vietnamese people would implement in an all-around way the decisions and deployments of the 13th National Congress of the CPV to strive to achieve the development goals of the CPV and the country.

China and Vietnam are a community with a shared future which bears strategic significance, Xi stressed, adding that the continuously sound and stable development of bilateral relations conforms to the fundamental interests of the two parties, countries and peoples, and is conducive to the vigorous development of their socialist causes and to safeguarding regional and world peace and stability to promote development and prosperity.

In the face of the impact of Covid-19 pandemic and the challenge of complicated external environment, pragmatic cooperation between the two countries in various fields has been enhanced against the headwinds, which reflected the remarkable advantages of the leadership of the communist parties and socialist systems, and demonstrated the great vitality of the relations between the two parties and countries, Xi said.

This year marks the 100th anniversary of the founding of the Communist Party of China and the beginning of China's 14th Five-Year Plan, Xi said, noting that it is also the first year for Vietnam to implement the spirit of the 13th National Congress of the CPV.

China, Xi added, is willing to work with Vietnam to accelerate the synergy of the Belt and Road Initiative with the "Two Corridors, One Economic Belt," promote the construction of cross-border economic cooperation zones between the two countries, and explore exchanges and cooperation in such fields as healthcare, digital economy and humanities.

The two sides should strengthen coordination and cooperation on international and regional issues, firmly uphold the international system with the United Nations at its core, oppose protectionism and unilateralism, and support a fast entry into force of the Regional Comprehensive Economic Partnership agreement, Xi noted.

China and Vietnam, he said, should properly manage the maritime differences and stand against the instigation of external forces to promote the development of regional peace and stability. 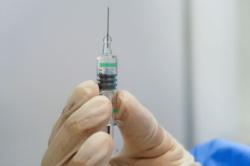