SALES at Hong Kong’s Lunar New Year flower markets have plummeted, according to florists who are lamenting the impact of coronavirus crowd-control measures and lower footfall.

Some growers reported their takings were down as much as 40 per cent by the second day of the festival compared with the same stage last year, and expected business overall to be the worst in decades.

Footfall was noticeably sparse shortly before lunchtime on Sunday, with the usual crowds largely absent from Victoria Park in Causeway Bay.

Florist Lo said sales of his speciality potted plants were 30 per cent lower for the first two days than they were in 2020. The 67-year-old said Covid-19 had driven business down to its worst level he had seen in 30 or so years of attending the annual flower markets.

“Our sales are so bad because of the reduced number of people inside the market as well as the reduced opening times,” said Lo, who only gave his surname.

The city’s 15 flower markets opened on Saturday, closing on Thursday, the eve of Lunar New Year.

The annual event – typically involving thousands of florists and vendors selling festive wares in public parks and courtyards across the city – was originally cancelled because of the coronavirus pandemic, but the government made a U-turn after an uproar from farmers.

To reduce infection risks, the number of stalls is limited to half-capacity and only flowers can be sold at each market. Infrared sensors are installed at entrances and exits to keep track of the number of people inside.

Lo said in previous years he would stay open as late as 2am, but this year stalls could only operate until midnight, with trade interrupted at peak hours at noon and in the evening by an hour of cleaning and disinfection.

Despite sluggish sales, Lo said he was freezing the prices of his plants, ranging from HK$88 (US$11) to HK$188, but might consider knocking off about HK$20 if business did not improve.

The same sentiment was shared at another stall in Victoria Park. A florist from Orchidya, which sells orchids from Taiwan, said sales so far this year had plunged about 40 per cent over last year.

Asking to be identified only by his surname, Chou said it was the second year they were running a stall at the market. The reduced sales were mainly caused by the crowd-control measures at the park, he said, even though prices of flowers were similar to last year.

However, some florists were bucking the trend by posting better sales than last year. 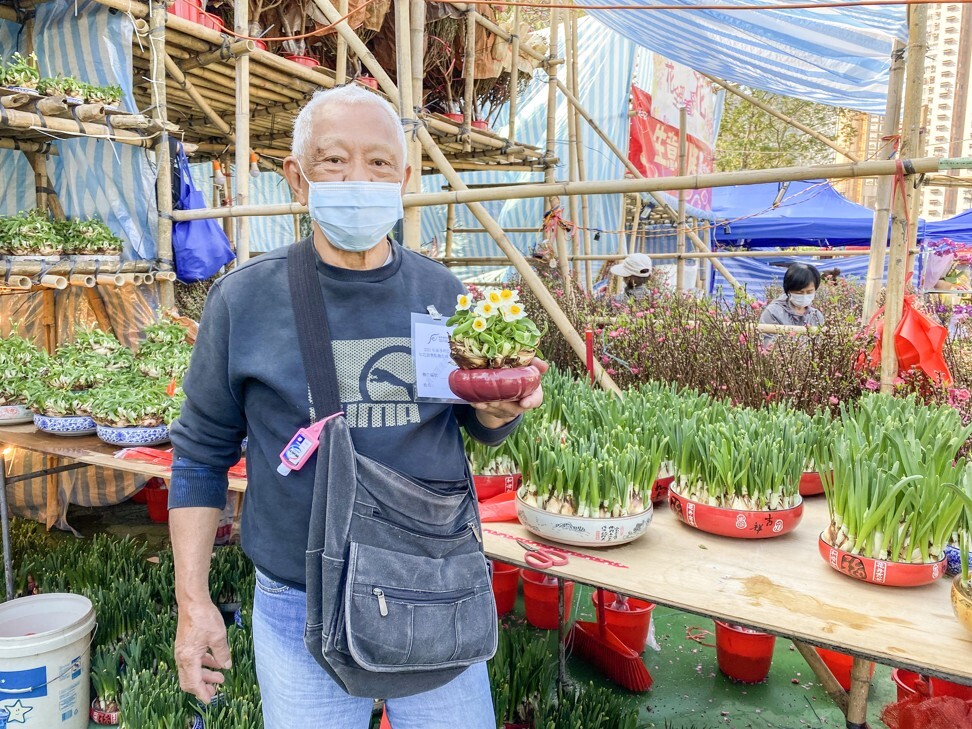 Florist Chiu Kwok-Cheung, 75, has attended the annual flower market at the park in Causeway Bay for more than 10 years, selling narcissus, or daffodil bulbs. He said sales of his flowers for the first two days this year were 10 per cent up on 2020.

Nearly all of those who bought his flowers were regular customers and returned to his stall every year, he said.

With crowd-control measures in place for the pandemic, many of his customers feared they might struggle to get hold of flowers so they ordered in advance, with many heading to the park to simply pick up their purchases.

“Because my flowers are unique in Hong Kong, which I have managed to grow in a particular form, my customers come to us every year,” he said. “This year is no exception.”

Chiu said the government’s decision to forge ahead with the event at the last minute almost doubled his costs this year, as he had to cancel orders of stock only to then have to repurchase.

That burden forced him to raise the prices of his flowers, but customers were not driven away, he said. Despite the pandemic, many Hongkongers were busy on Sunday doing their Lunar New Year shopping, including buying flowers to decorate their homes for the festive season.

Raymond Ko, 72, drove from his home in Central to the Victoria Park flower market early on Sunday with his son, spending about HK$1,000 on peach blossom, gladiolus and mandarin orange trees.

The retired civil servant said with crowd-control measures in force, the risk of infection was not a cause for concern. “The environment here is hygienic and safe, with a limited number of people. So I’m not worried.”

The number of visitors to the flower market in Fa Hui Park, Mong Kok, on Sunday afternoon was also relatively small, although florists said the showing was already an improvement on the previous day’s.

About 10 people were seen hovering around each of the park’s 38 stalls, which were selling orchids, mandarin trees, narcissus and peach blossoms. 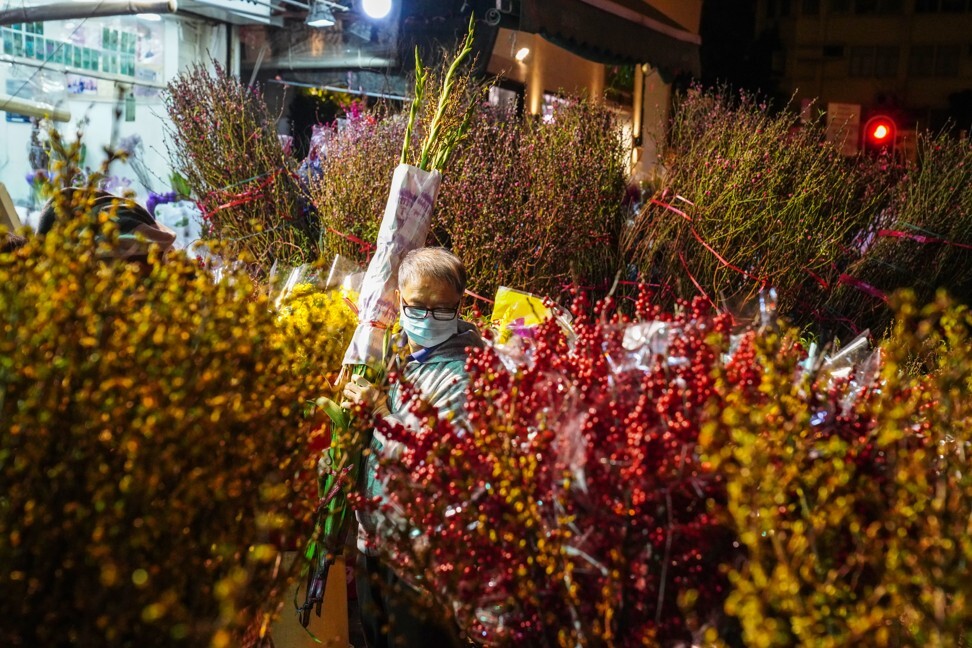 Florist Chan Cheung-lung, 50, said the number of customers at his stall was down up to 20 per cent on last year.

Chan said he had already lowered the prices of his flowers by 10 per cent in a bid to attract more buyers and expected to see more shoppers over the next few days.

“The number of visitors is so small. I’m worried that this year’s sales will be the worst,” he said, who has sold orchids at the market each year for more than a decade.

May Wong, 65, bought a mandarin tree, a symbol of good fortune and prosperity, for HK$350 when she visited the market on Sunday afternoon with her husband.

A visitor to her neighbourhood market in Mong Kok every year, she said the pandemic would not discourage her from fulfilling her new year routine, adding: “It is a tradition of our family to have a mandarin tree at home for Lunar New Year.” - South China Morning Post