MALAYSIA’s Health Ministry completed a 550km practice run in rural Sarawak to test its Covid-19 vaccine supply chain, while Indonesia’s president rolled up his sleeve on live television to get the jab.

South-East Asian countries are slowly rolling out vaccines, navigating regulatory hurdles, accelerating infections and supply bottlenecks across a vast and diverse population in the first mass immunisation of its kind in history.

Past immunisation programmes for diseases like polio and tuberculosis had captive audiences: school children, for example.

This time everyone needs a shot. The effort will be uneven. Experts say richer countries will be faster at rolling out vaccines, helped by well-staffed medical services and experience with past epidemics.

But political will, logistics and regulation will also weigh on the pace of immunisation.

“The volumes of people to vaccinate is a problem to be overcome, ” Wiku Adisasmito, spokesman for Indonesia’s national Covid-19 task force, said.

Indonesia aims to vaccinate two thirds of its roughly 270 million people over the next 15 months, the government said last month.

That target, however, is “not set in stone”, Wiku said.

Vaccination rates of nearly a million a day are “manageable” on the crowded and more urbanised western half of the archipelago, Wiku said. But it will be an uphill climb in the far-flung islands.

Indonesia may use its military as well as logistics companies to help with the effort, he added.

“On distant islands, the transportation, the logistics, the cold chain will be problematic, but it doesn’t mean it can’t be solved, ” Wiku said.

For its part, Malaysia hopes to immunise its 32 million citizens over the next 18 months after it gets its first vaccine shipment this month.Health officials wrapped up a vaccine-delivery practice run last week that started in Belgium, where Pfizer-BioNTech makes its Covid-19 shot, and ended at a rural health clinic in Belaga, Sarawak, in the heart of Borneo.

The successful rehearsal was to test a delivery chain through which the vaccine must remain at -70°C.

The region’s richer and geographically smaller economies are expected to wrap up immunisation even faster.

Singapore started vaccinations in late December and expects to have enough doses to cover all citizens and residents by September.

The Economist Intelligence Unit (EIU) said on Jan 27 that Singapore, Hong Kong and Taiwan will reach so-called herd immunity by the end of the year, with Australia and New Zealand soon to follow.

But limited resources and regulatory delays in the rest of the region will collide with the realities of reaching 650 million people scattered over a cross-section of cities, villages and jungle.

Vietnam and Thailand will not be sufficiently immune until the middle of 2022 at the earliest. Indonesia’s ambition to vaccinate 181.5 million people over the next 15 months will take twice as long.

Laos and Myanmar and other poor countries won’t reach herd immunity before 2025 – if at all.

The resulting patchwork of immunity versus vulnerability risks giving the virus a chance to mutate. Countries will need to pool resources to extend vaccinations to their poorer neighbours to keep the pandemic at bay.

“It’s in the interest of the vaccinated countries to help, ” said EIU analyst Imogen Page-Jarrett, who helped compile the report.

While Thailand will import about two million doses of Sinovac by April for health workers, it’s counting on a locally produced version of the AstraZeneca-Oxford vaccine for its immunisation drive but the first doses won’t be available until June.

The company that will make the AstraZeneca vaccine, Siam Bioscience, is owned by King Maha Vajiralongkorn, drawing fire from opposition figures of self-dealing at the expense of public health.

In the Philippines, disorganisation and past trauma may also be slowing its vaccine roll-out. The government has made few firm plans to buy any foreign vaccine except for a combined half million from Pfizer and AstraZeneca in February and two million doses a month from China’s Sinovac between now and early next year for its 108 million residents.

Asia’s roll-out starts amid signs that the number of new cases is accelerating.

Indonesia’s tally of infections blew past the one-million mark last month, with one swab test in four turning up positive.

While the tally is low by comparison with the United States and Brazil, it strains Indonesia’s health infrastructure. The country has half the hospital beds per thousand people than neighbouring Malaysia.

Dr Dicky Budiman, an epidemiologist with Griffith University in Queensland, said there may be too much emphasis on immunisation.

While vaccines may prevent sickness, it’s not clear whether they stop transmission. Distancing and masks are still key.

“Vaccination is not the super bullet, ” Dr Dicky said. “It’s just one of the tools.” — The Straits Times/ANN 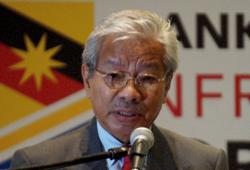