SEOUL (AFP): South Korea recorded its worst growth in more than two decades in 2020, the central bank said Tuesday (Jan 26), but it is expected to be among the best-performing OECD economies in the wake of the coronavirus pandemic.

The country's gross domestic product contracted 1.0 per cent in 2020 from a year earlier, the Bank of Korea said, citing weak private spending and exports.

It marks the worst annual growth since 1998, when the South Korean economy shrank 5.1 per cent in the aftermath of the Asian financial crisis.

Still, South Korea is expected to be among the countries in the OECD group of developed economies least affected by the pandemic in 2020.

In the fourth quarter of 2020, the South's economy -- the world's 12th-largest -- grew 1.1 per cent from the previous quarter, data showed, marking a second consecutive quarter of growth amid the pandemic.

The central bank said exports expanded 5.2 per cent in the fourth quarter from three months earlier, offsetting a slump in private consumption due to toughened social distancing rules in recent weeks.

South Korea has shown signs of recovery from the virus downturn and the central bank in November forecast the economy to grow 3 per cent in 2021.

The South has largely contained its coronavirus outbreak -- while the pandemic has killed more than two million people worldwide -- with widespread testing and contact-tracing. 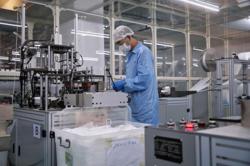