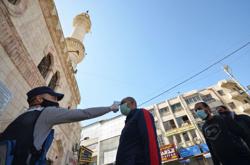 HONG KONG: The government is on target to lifting the city’s first lockdown on a densely packed inner city area, with a senior official saying he does not rule out more lockdowns if needed.

Chief Secretary Matthew Cheung told reporters yesterday that based on government data, there are about 8,000 people in the restricted area in Jordan, a neighbourhood on the Kowloon Peninsula.

This is down from the previous “liberal estimate” of 10,000 given by the government on Saturday.

He said almost 7,000 individuals had been tested as of Saturday after government staff went door to door but 45 households did not answer the door.

Cheung said the government was unable to determine the exact number of people who fled the area before the lockdown on Saturday, but added that there “shouldn’t be many”.

Speaking after an inspection of the area, Cheung said the lockdown reflects the decisiveness of the government in taking appropriate action and that it will learn from this experience to improve on “inadequacies”.

He added that more lockdowns could be implemented in other districts when necessary.

More than 3,000 government staff were deployed in a multibureau effort to force people to go for tests in a specified, restricted area in Jordan – an area where the coronavirus has been spreading.

The government said it aimed to wrap up the whole exercise in 48 hours so as to “achieve the goal of zero cases in the district” and allow residents to get to work today.

People in the area were to stay in their premises after the tests, while anyone who visited the area for more than two hours in the past two weeks were to undergo testing.

The government on Saturday said a higher ratio of sewage samples found in buildings in the restricted area in the past few days tested positive, compared with samples from other areas of Jordan, implying that possibly infected persons could be present.

It added that as the buildings in the restricted area were old, lack maintenance and subdivided units are common, infection risks are high.

Preparation work started overnight on Friday, with workers delivering food and cleaning supplies to the area as officials cordoned off the restricted zone to set up temporary specimen collection stations.

Some residents were spotted “fleeing” late into the night with their luggage and pets, local media reported. This came after news was leaked earlier in the day about the pending lockdown, but health officials did not comment on it.

As at Saturday, Hong Kong recorded 81 new Covid-19 cases, of which 78 were local and 35 were untraceable.

It has been a year since the city recorded its first confirmed Covid-19 case – a 39-year-old man from the Chinese city of Wuhan who landed in Hong Kong on Jan 22 via the high-speed rail. The tally has now risen to 10,009 cases and 168 deaths. — The Straits Times/ANN 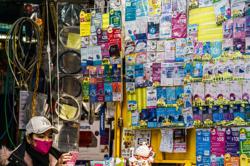 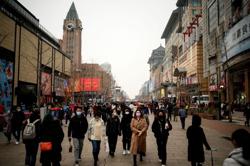