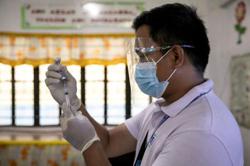 A man preparing to spray disinfectant around Klong Toey fresh market, after it was temporarily shut down due to several vendors testing positive for Covid-19, in Bangkok on Jan 14, 2021.- AFP

BANGKOK (The Straits Times/ANN): Thailand looked like it was ahead in the regional scramble for a coronavirus vaccine in October when it announced a local firm would manufacture the Oxford-AstraZeneca vaccine for domestic use and distribution to nearby countries.

But with a locally produced vaccine months away while local transmissions grew over the new year, Thailand sought to boost its initial reservation of 26 million doses.

It ordered 35 million more, and supplemented that with two million doses of vaccine from China's Sinovac Biotech. The first batches of British and Chinese-made vaccines are expected to arrive next month.

Neighbouring Cambodia levelled up with some help from close ally China, which pledged to gift it one million doses of vaccine. According to local media, the first 300,000 doses from China's Sinopharm are also expected to arrive next month.

But it was Myanmar that took the eventual lead. New Delhi sent it 1.5 million free doses of Indian-manufactured Oxford-AstraZeneca vaccine on Friday (Jan 22), as part of its Vaccine Maitri (friendship) Initiative. The first Myanmar healthcare workers will get their jabs starting this week.

With millions of dollars at stake and much still to be learnt about Covid-19, the regional race to acquire enough vaccine has been coloured by geopolitics and shaped by domestic sentiments.

Bangkok, after making public its plan to use China-made vaccines, found itself on the backfoot when locals questioned their efficacy.

The Thai Food and Drug Administration, after initially pledging to expedite Covid-19 vaccine approvals, said it would proceed carefully, while Prime Minister Prayut Chan-O-Cha had to personally reassure people that only vaccines proven safe would get the green light.

This was after opposition figure Thanathorn Juangroonruangkit alleged the deal between AstraZeneca and its chosen local manufacturer Siam Bioscience -- owned by King Maha Vajiralongkorn -- lacked transparency.

The Thai government promptly lodged lese majeste complaints against Thanathorn, making some wonder whether discussion about a central plank of Thailand's vaccine strategy was now a no-go zone.

Over in Cambodia, Prime Minister Hun Sen, after vowing to use only vaccines approved by the World Health Organisation, backtracked by saying Cambodia could not afford to wait. He declared he would be first in line for the Chinese vaccine by the state-owned Sinopharm.

"China is here to stay in Cambodia and I don't think any other major powers can challenge that status quo," he told The Straits Times.

Even so, Hun Sen was careful to hedge his bets, requesting vaccine donations via India's ambassador to Cambodia last Monday.

It was the Serum Institute of India, the world's largest vaccine maker, that Myanmar eventually turned to when it placed an order for 30 million doses of the Oxford-AstraZeneca vaccine.

Like many other countries, Myanmar was in discussion with multiple sources for vaccines,"yet it is also careful not to upset its big neighbour to the east", says Khin Khin Kyaw Kyee, a China-watcher at the Institute for Strategy and Policy -- Myanmar.

There were initial fears India would take months to export vaccines while the country embarked on its own massive domestic inoculation drive. But New Delhi assuaged some concern last week by sending free vaccine to nearby countries like Bangladesh, Maldives and Myanmar.

India's donation to Myanmar came about a week after visiting Chinese foreign minister Wang Yi pledged to give Naypyitaw 300,000 doses of the Chinese vaccine, giving the impression New Delhi was pushing back against Beijing's vaccine diplomacy.

"This is a kind of competition that doesn't hurt because there is a need, as long as the vaccine has real efficacy and the country is in some position to determine what kind of vaccines it wants," Sihasak Phuangketkeow, a former permanent secretary of Thailand's Ministry of Foreign Affairs told The Straits Times.

Beijing has so far pledged free vaccines to Myanmar and the Philippines and promised to work with Indonesia to make it a regional vaccine production hub.

"It is important for China to show, as the biggest developing country in the world, it is in a way looking after the interest of developing countries," says ISEAS-Yusof Ishak Institute senior fellow Lye Liang Fook.

Both Sihasak and Indian analyst Bhaskar Balakrishnan, however, downplayed the strategic impact of vaccine donations, saying it is a humanitarian issue at stake.

"The director-general of the World Health Organization... said the most needy and poorest in the world should not be overlooked, they should also get the vaccine," said Dr Balakrishnan, a former ambassador and now science diplomacy fellow at the Research and Information System for Developing Countries in New Delhi.

"We entirely agree with that in India, and we are doing whatever we can to make sure that kind of gap doesn't appear."

Sihasak thinks Asean should coordinate the purchase of vaccines through its recently endorsed Covid-19 fund to help the neediest members, rather than leave them to the mercy of various bilateral arrangements.

The bloc can also act as a clearing house for information about vaccinations, to help regional citizens travel when borders reopen.

"Asean must work together to develop a regional strategy on vaccines," he said.

"It's probably best if countries can make pledges through the fund because it maintains Asean centrality."

Amid the regional frenzy over vaccines, Vietnam stands as the odd one out.

Having successfully contained two waves of infections with a combination of lockdowns, quarantines and aggressive contact-tracing, it has ordered 30 million doses of AstraZeneca's formula, but appears in no hurry to secure more for its 97 million population. It had earlier said that rushing to buy vaccines could be financially risky.

Vaccination, after all, is merely one part of the equation that can help reopen borders and rehabilitate economies devastated by the pandemic, say analysts.

Even as the region prepares to start mass vaccinations against the wily virus, the finish line remains unclear.

Faced with the daunting cost of vaccinating their populations against the coronavirus, Myanmar and Cambodia are raising money through donations.

Donors in Cambodia have contributed over US$56 million since last month, according to Radio Free Asia.

King Norodom Sihamoni and his mother, who gave US$1 million in total, were among them.

Myanmar, which launched its appeal this month, has received over US$10 million so far. One of the first donors in Myanmar was the military, which controls two of Myanmar’s largest conglomerates. It stumped up one billion kyat (US$740,000).

The Royal Group’s Kith Meng contributed US$3 million with his wife, while Dr Pung Kheav Se, chairman of Canadia Bank, donated the same amount, according to the Khmer Times.

Prime Minister Hun Sen has thanked the philanthropists in letters, writing that Dr Chen’s contribution “will always be remembered in the history of the people of Cambodia”. - The Straits Times/Asia News Network 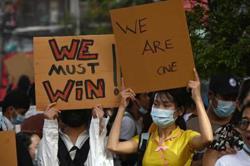