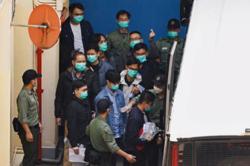 This photo taken on January 20, 2021 shows members of a rescue team working at the site of a gold mine explosion where 22 miners are trapped underground in Qixia, in eastern China's Shandong province. Four miners in total have so far been rescued. - AFP

JINAN, Jan. 24 (Xinhua): Three more miners were rescued on Sunday after being trapped underground for two weeks due to a blast in a gold mine in east China's Shandong Province.

Earlier on Sunday morning, the rescuers lifted a trapped worker.

The worker, said to be in extremely weak condition, was lifted from the mine at 11:13 a.m. Sunday, and has been rushed to a hospital for treatment.

Currently, 633 people and 407 equipment are at the site for rescue operations.

Twenty-two miners have been trapped about 600 meters underground since the mine blast on Jan. 10 in Qixia, under the city of Yantai, in Shandong Province.

Before Sunday, rescuers had established contact with only 10 of the miners, who are in good physical and psychological condition. Another is believed to have been dead.

Rescuers said Saturday that the 10 workers have returned to a normal diet after relying on nutrient solutions for survival in previous days.