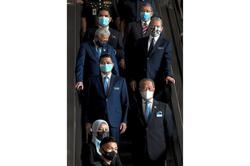 BANGKOK, Jan. 22 (The Nation Thailand/ANN): The new wave of Covid-19 will delay Thailand’s economic recovery and affect 4.7 million workers, a senior official at the Bank of Thailand (BOT) has warned.

Chayawadee Chai-Anant, senior director in the BOT economic and policy department, said though the second wave of infections is not as severe as the first, it would still delay economic recovery to pre-crisis levels – possibly till late next year.

“The recovery will be a K-shaped, not V-shaped, but if government measures are effective, it will be close to a V-shape recovery,” she told a seminar hosted by the World Bank.

The government has limited lockdowns and restrictions to specific locations after the fresh outbreak in December, while also launching new aid measures that are smaller in scale than in the first virus wave early last year.

The Thai economy showed signs of recovery in the third quarter last year, but the second wave of infections has disrupted that trend.

“Thailand’s economy could return to pre-crisis level in mid-2022, or the recovery may be delayed to late of 2022,” said Chayawadee.

Tourism-related sectors such as restaurants, hotels and transport would feel the brunt of the new outbreak as they have yet to recover from the first wave, she added.

The second wave will hit 4.7 million workers hard, costing either their jobs or reducing their hours along with their income, according to an initial assessment by the central bank and business sectors.

Chayawadee said three key factors needed to be closely monitored.The first factor is how long the pandemic will last.

Second is the effectiveness of government aid measures, and third is how Thailand will open the country to foreign arrivals. Linked with the third factor is the scale of vaccination in the country. Meanwhile, Thailand confirmed 309 coronavirus cases on Friday, mostly via active testing, according to Center for the COVID-19 Situation Administration (CCSA).

Of the total new cases, 297 were domestic ones while 12 others were those who had returned from abroad, CCSA spokesman Taweesin Visanuyothin said.

The new local infections included 217 of those who have tested positive via active testing conducted by mobile units at factories and communities mostly in Samut Sakhon province and Bangkok, Taweesin added.

Meanwhile, Taweesin himself on Friday took a Covid-19 test since a news anchorman of a government-run TV channel, who he has worked with during the daily briefing, was a close contact with a confirmed case.

The Bangkok Metropolitan Administration (BMA) has permitted 13 businesses to reopen since Friday, including gaming centers, beauty salons, fitness centers, among others, due to a recent decline of new infections in the capital city