The new measure will target the Sham Shui Po and Jordan districts.- Bloomberg

HONG KONG (Reuters): Hong Kong will place tens of thousands of its residents in a lockdown to contain a new outbreak of the coronavirus, the first such measure the Chinese-ruled city has taken since the pandemic began, a local newspaper reported on Friday (Jan 22).

South China Morning Post, citing unnamed sources familiar with the situation, said the new measure will target the Jordan and Sham Shui Po districts which cover a small, but densely populated part of the Kowloon Peninsula.

The districts are home to many ageing, subdivided flats in which the virus could spread more easily.

"Persistently high and spreading infection (in the areas) and sewage surveillance suggest the outbreak is not yet under control, and many silent sources still exist within the area," a source was quoted as saying.

Health authorities in the city of 7.5 million first isolated four tenement blocks in the area last Friday, stopping people from entering or leaving those buildings to make sure all residents are quarantined.

The government will only lift the lockdown declaration when it is satisfied everyone in the lockdown area has been tested, the paper said. 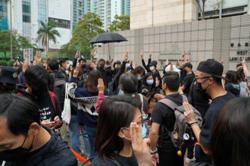