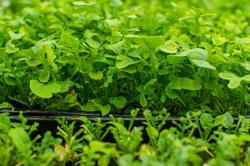 With regulations to limit land conversion or to protect forests, emissions could have been reduced to 0.8 gigatonnes, according to the study published this month in the journal Nature Food.

“It’s unrealistic to say we can’t convert more land, given that the world’s population is growing, especially in developing countries, ” said Chuan Liao, assistant professor in ASU’s School of Sustainability and the study’s lead author, yesterday.

“But we still must minimise carbon emissions while pursuing agricultural development.”

A sharp rise in food prices in 2007 triggered a global rush for land to increase food security, with wealthier nations and multinational businesses snapping up land in poorer nations.

Worldwide, land is increasingly concentrated in fewer hands, mainly those of large agriculture businesses and investors, with the largest one per cent of farms operating more than 70% of the world’s farmland, according to a 2020 study.

While the socio-economic consequences of such deals have been apparent – including threats to the livelihoods of smallholder farmers – regulations to limit environmental damage are rare, as the goal is to boost food output, Liao said.

“Enforcing environmental policies does not reduce the amount of land that can be used for agricultural development.

“Yet it is difficult, given that the host-country governments are so keen to catch up through agricultural development, ” he added.

So it is best to balance the two needs by allowing agricultural development on lands with lower carbon values or low forest cover, and by revitalising abandoned farmlands to generate lower carbon emissions, he said.

To meet growing food demand, it is necessary to raise output on existing croplands and enforce laws