The country is now free of Avian influenza (AI) or bird flu, the Department of Agriculture (DA) announced.

The DA said yesterday that the World Organisation for Animal Health (OIE) had declared the Philippines free of the last remaining A(H5N6) strain of AI as of Jan 8.

In its report to the OIE, the DA Bureau of Animal Industry (BAI) said farms in Pampanga and Rizal, where an outbreak of AI A(H5N6) occurred, showed no further evidence of the presence of the virus during surveillance and monitoring.

“We had not detected any case of AI A(H5N6) among the poultry and other bird population in the last 90 days after the completion of cleaning and disinfection in the affected farms, surveillance and monitoring, and completion of the 35-day restocking period with sentinel animals in Pampanga and Rizal, ” DA-BAI Ronnie Domingo said.

However, the South-East Asian country, a major importer of chicken and other poultry products, was not dropping its guard against the disease, it said.

The agriculture department had imposed a temporary ban on the importation of domestic and wild birds and their products from France, South Korea, the Netherlands and Poland, where another highly pathogenic strain – H5N8 -–has been detected. 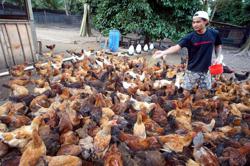