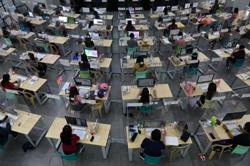 A health worker conducts mock vaccination during a simulation exercise for the coronavirus disease vaccination activities, at the Universidad de Manila, in Manila, on Tuesday (Jan 19, 2021). - Reuters

MANILA, Jan 19 (Bloomberg): The Philippines has allowed China’s Sinovac Biotech Ltd to hold clinical trials in the Southeast Asian nation for its coronavirus vaccine, which President Rodrigo Duterte prefers to be inoculated with, officials said.

Duterte will take the first Sinovac shot once available, but wants the inoculation to be in private, his spokesman Harry Roque said at a briefing.

The Philippine Food and Drug Administration is still waiting for Sinovac to submit documents on late-stage trials before processing its separate application for emergency use in the country, the regulator’s head Eric Domingo said in a separate interview with state-run PTV-4.

The Philippines has said it will buy 25 million vaccine doses from Sinovac, expecting the first shipment to arrive as early as next month.

The Philippines will also sign an initial deal with Moderna Inc in the coming days, with the vaccines expected to start arriving in May, CNN Philippines reported, citing vaccine czar Carlito Galvez.

The South-East Asian nation aims to buy 148 million doses to inoculate more than half of the population this year.

Meanwhile, the Department of Health (DOH) of the Philippines reported on Tuesday (jan 19) 1,357 new confirmed Covid-19 cases, bringing the total number of confirmed cases in the South-East Asian country to 504,084.

The death toll climbed to 9,978 after 69 more patients died from the viral disease, the DOH said. It added 324 more patients recovered, raising the total number of recoveries to 466,249.