An elderly man walks past a clothing vendor's street market in Hong Kong. The island has extended the social distancing measures due to expire this week as well as expand mandatory testing to battle an extended wave of coronavirus cases. - AFP

HONG KONG, Jan 19 (Reuters/Bloomberg): The Hong Kong government said on Tuesday (Jan 19) it will extend work from home arrangements for civil servants until Jan. 27 as the global financial hub seeks to contain a rise in coronavirus infections into triple digits.

On Monday, Hong Kong reported 107 new cases of coronavirus, the highest number in nearly a month, fuelling concern over a new wave of infections in the densely populated city where businesses are already reeling from restrictions.

Hong Kong will also extend social distancing measures due to expire this week as well as expand mandatory testing to battle an extended wave of coronavirus cases.

Chief executive Carrie Lam made the announcement on Tuesday (Jan 19) morning at a weekly press briefing, adding that the government would reveal details later in the day.

The announcement comes as the number of Covid-19 infections in the Asian financial hub climbed back into triple digits.

“This shows that we still have transmission chains across the territory, ” Lam said. “So what we need to do now is join hands and curb transmission as much as possible.”

Despite almost two months of social distancing, the city's infection curve appears to be ticking back up after mass testing was conducted among some housing estates.

The city has seen virus clusters in a number of buildings in the dense Yau Ma Tei and Jordan neighborhoods of Kowloon. Mrs Lam said new measures and restrictions would be coming for those areas.

She said the higher number of reported cases on Monday came from a renewed effort to test problematic areas, including by deploying mobile testing units, and did not represent a worsening of the pandemic in Hong Kong.

“Let me reassure the public not to panic, ” Mrs Lam said. “We need to step up our efforts on testing.” 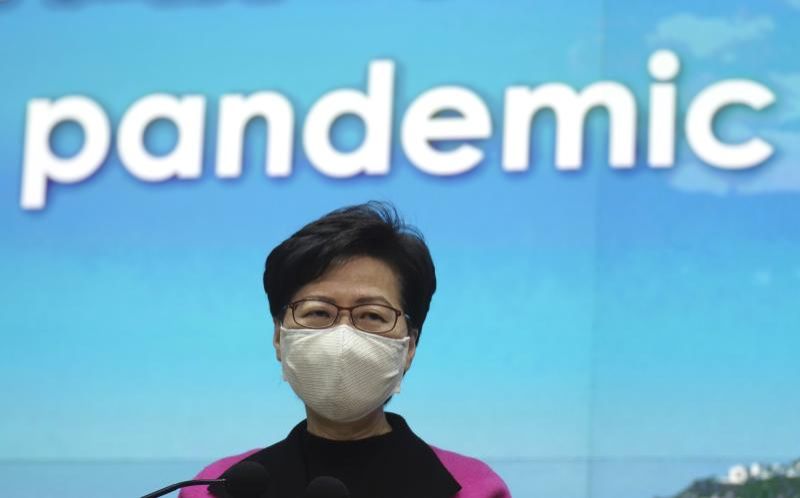 The city saw a resurgence in the number of cases at the end of November, prompting curbs including shutting down dining in restaurants after 6pm and closing gyms and beauty salons.

On Jan 4, Hong Kong extended its suspension of face-to-face school classes until mid-February. Schools have been mostly shut for a year, with many having switched to online learning and lessons by conference call.

The now long-running restrictions have continued to weigh on Hong Kong’s economy, which has been battered by both the pandemic and landmark mass protests in 2019.

On Monday, a panel of experts said they have recommended that Hong Kong approve the Pfizer-BioNTech coronavirus vaccine for use, clearing the way for a regulatory greenlight as the city tries to stamp out a winter outbreak that appears to be worsening.

It is the first vaccine on track for approval in the Asian financial city, which likely means that the vulnerable groups which the government has prioritised, such as healthcare workers and the elderly, will receive this shot.

The vaccine is being marketed by Shanghai Fosun Pharmaceutical Group in mainland China, Hong Kong, Macau and Taiwan.

But the panel also wants more information on which groups to prioritise in administering the vaccine.

After the endorsement by the 12-person vaccine advisory panel, Secretary for Food and Health Sophia Chan will make a final decision on approving the vaccine for use. Officials said that the city's vaccine roll-out will start around the Chinese New Year holiday, which this year begins on Feb 12. - Reuters/Bloomberg