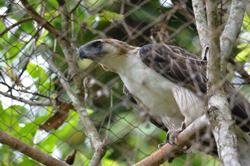 Big loss: For 28 years, Pag-asa was a celebrity, bringing hope and joy to visitors to the Philippine Eagle Center in Davao City. — Philippine Daily Inquirer/ANN

Pag-asa, the first Philippine eagle bred and hatched in captivity, was growing weaker at the tail end of the tumultuous 2020, after refusing to eat for weeks, and veterinarians and keepers at the Philippine Eagle Foundation were doing their best to keep the raptor alive.

Like other birds, Philippine eagles tend to mask their illnesses, often until it’s too late to save them.

For conservationists who have tirelessly worked on protecting the dwindling population of the bird, Pag-asa’s death is nothing short of tragic.

But it is also a reminder of the constant hard work that must be done to save what remains of the critically endangered species.

The plight of the Philippine eagle, the largest and among the rarest and most powerful birds in the world, first broke into public consciousness in the late ’60s, when logging was at its peak.

As their population plummeted, the government embarked on a captive breeding programme in the late ’70s.

But without adequate knowledge about the birds, the programme resulted in one failed experiment after another.

A much-needed breakthrough came a few years later. Pag-asa was laid in November 1991 through a process called “cooperative artificial insemination”.

With bated breath from his keepers and eagle conservationists, Pag-asa finally hatched on Jan 15,1992.

The name Pag-asa was chosen, particularly for what the eaglet’s hatching symbolised: hope for the population of the Philippine eagles, and hope for the country’s rich biodiversity. — Philippine Daily Inquirer/ANN