Change of guard to test war on graft 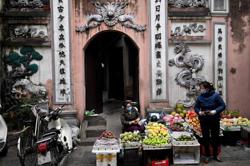 IN this pandemic battered environment, few countries are approaching a major leadership transition amid conditions as rosy as Vietnam’s.

With domestic coronavirus infections largely under control, its economy is expected to outpace the region at 6.7% growth in 2021.

makes the country even more attractive as a harbour for investors fleeing the trade war between China and the United States.

While airlines around the region bit the dust, Vietnam’s fifth carrier launched its maiden flight in December last year.

But now, all eyes are on the changes afoot in the party.

Its National Congress, due Jan 25 to Feb 2, is a five-yearly affair that sets the country’s socio-economic direction and anoints its top politicians, including the most powerful quartet – party general secretary, prime minister, president and chairman of the national assembly.

Traditionally, the posts are spread among politicians from different geographical regions to promote national unity.

While results of the upcoming conclave will be the product of months of negotiations, there may still be last minute surprises.

The big question is, who will succeed 76-year-old general secretary Nguyen Phu Trong? Or will the party waive the 65-year age and two-term limits to allow him to stay on?

Trong first assumed the post in 2011 and then won a second term in 2016, beating back a challenge by then prime minister Nguyen Tan Dung, who was later sidelined.

In 2018, when then president Tran Dai Quang died, Trong assumed primacy as both president and general secretary.

Technically, Politburo members over the age of 65 are supposed to retire, but exceptions have been made in the past.

“We are at the juncture where half of the remaining Politburo members are over 65 years old – the threshold of the age limit. It’s time for a generational change, ” says Huong Le Thu, a senior analyst at the Australian Strategic Policy Institute.While exceptions can be made for overaged candidates, they are done selectively – and to add to the collective strength of the chosen leaders.“It really depends on the constellation, ” she said. “It’s not just about who – whether the general secretary or prime minister – gets the exception. It’s a constellation of top key positions that will decide.”

Trong’s sweeping war on graft has felled dozens of senior officials, including Politburo members, former and current ministers and generals. Many of them were cronies and allies of former prime minister Dung.

Trinh Xuan Thanh, a former senior executive of state-owned PetroVietnam, was abducted from Germany in 2017 and sentenced to life imprisonment for embezzlement.

Meanwhile, the state has kept up pressure against dissidents, most recently jailing prominent journalist Pham Chi Dung this month for “making and disseminating propaganda against the state”.

The next prime minister will have his hands full steering the country through the very challenging post-Covid environment, says Huong.

He would have to “harness the potential consequences of the US-China trade war, which makes Vietnam an attractive market, and also harness the early recovery from Covid-19”. — The Straits Times/ANN