SEOUL (Reuters):South Korea's exports during the first 10 days of January dropped 15.4% from a year earlier, customs agency data showed on Monday (Jan 11), as shipments to both China and the United States declined.

Imports slumped 22.9% from a year earlier, while average exports per working day saw a gain of 5.8%. 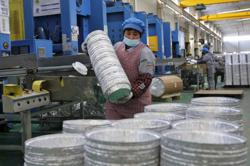