Chinese paramilitary police wearing face masks to protect against the spread of the coronavirus patrol along a street in Beijing, Saturday, Jan. 9, 2021. - AP

China’s National Health Commission reported Sunday that 69 new cases had been confirmed in the latest 24-hour period, including 46 in Hebei.

The outbreak has raised particular concern because of Hebei’s proximity to the nation’s capital.

Travel between the two has been restricted, with workers from Hebei having to show proof of employment in Beijing to enter the city.

Hebei has recorded 183 confirmed cases and an additional 181 asymptomatic cases over the last eight days.

China does not include those who test positive but do not show symptoms in its official case count.

Almost all the cases are in Shijuazhuang, the provincial capital, which is about 260km (160 miles) southwest of Beijing.

A handful have also been found in Xingtai city, 110km (68 miles) farther south.

Both cities have conducted mass testing of millions of residents, suspended public transportation and restricted residents to their communities or villages for one week.

Beijing reported one new case Sunday, bringing the number of confirmed cases to 32 in a smaller outbreak that started about three weeks ago. 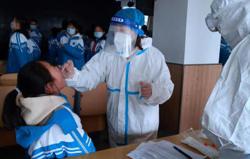