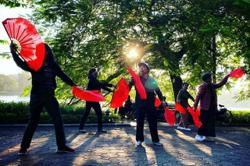 A foreign expert working at the Hospital for Orthopedic and Rehabilitation in Hanoi. - The Vietnam News/Asian News Nedtwork

HANOI, Jan 8 (Vietnam News/ANN): The government recently issued Decree No 152/2020/ND-CP, including regulations on foreigners working in Vietnam and the recruitment and management of Vietnamese working for foreign organisations and individuals in the country, which will be enforced on Feb 15.

At least 30 days prior to the day foreign labourers are set to start work, employers, except for contractors, are responsible for identifying the demand for foreign employees for each position that Vietnamese workers have yet to satisfy and explaining the issue to the Ministry of Labour, Invalids and Social Affairs (MoLISA) or the provincial-level People’s Committees in the localities where foreigners are set to work in.

If they want to change the demand for foreign labourers, employers have to report to MoLISA or provincial-level People’s Committees at least 30 days prior to the day foreign labourers start work, according to the decree.

Meanwhile, MoLISA or the provincial-level People’s Committees have to issue documents accepting or rejecting the use of foreign workers for each job position within 10 working days from the reception of explanation or report on the change in foreign labourer demand.

In addition, before recruiting foreigners, contractors are responsible for detailing the number, professional capacity, and experience of foreign workers they want to employ to implement bidding packages in Vietnam, while proposing the recruitment of Vietnamese workers for the positions for which they plan to employ foreigners to the chairpersons of provincial-level People’s Committees in the localities where bidding packages are carried out.

Contractors have to report on the use of foreign employees during the first half of a year and the whole year before July 5 and Jan 5 of the following year, respectively, the decree said.

Meanwhile, Vietnam reported three new cases of Covid-19 infection on Friday (Jan 8), raising the total confirmed cases in the country to 1,512 with 35 deaths, according to its Ministry of Health.

The new cases, including an Austrian expert and two Vietnamese citizens, recently entered the country from abroad and were quarantined upon arrival.

The ministry also announced that four more patients have been given the all-clear, raising the total cured cases in the country to 1,357 as of Friday.