File photo released by Indonesia's accident mitigation agency, on Feb 12, 2019 shows the lava flow into the sea from Mount Karangetang on Siau Island in North Sulawesi which is prone to earthquakes. - AFP

JAKARTA (Xinhua): A 6.2-magnitude earthquake jolted central Indonesia early Thursday (Jan 7), but no damage or casualties were reported, and no tsunami warning was issued, officials said.

The Meteorology, Climatology and Geophysics Agency has earlier measured the quake at 6.4 magnitude but later revised it down, an official at the agency Aziz Widiarso said.

"We did not issue a warning for tsunami as the center of the quake was deep," he told Xinhua by phone.

The tremors were felt in the provinces of Gorontalo, Central Sulawesi, North Sulawesi and South Sulawesi, according to him.

The quake, which struck at 3:59am Jakarta time Thursday (2059 GMT Wednesday), was centered 71km away from Bonebelango district, Gorontalo province, with the depth of 131 km, the official said.

"The jolts of the quake were very weak. So far, we did not get any information about the damage or those who are injured due to the quake," Hendry Ticoalu, head of the Disaster Management Agency in Gorontalo, told Xinhua.

Indonesia has been frequently hit by earthquakes as it lies on a quake-prone zone called the "Pacific Ring of Fire." 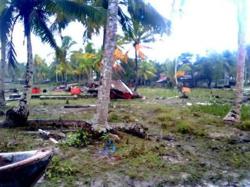