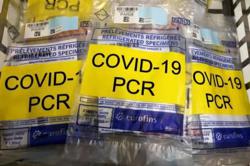 The country is closing its borders to foreign travellers from all around the world for the first two weeks of 2021, Foreign Minister Retno Marsudi announced, amid concerns over the discovery of a more infectious SARS-CoV-2 variant first detected in the United Kingdom.

Last week, scientists from the UK’s New and Emerging Respiratory Virus Threats Advisory Group discovered a new strain of the coronavirus that has been spreading rapidly in Britain, Reuters reports.

UK Prime Minister Boris Johnson said the new variant, known as the B117 lineage, may be up to 70% more transmissible than the original disease, although there has yet to be evidence that it causes more severe illness or higher mortality.

This new strain has since been found in a number of European nations, Canada, Japan, Australia and Singapore.

“In response to these developments, a limited Cabinet meeting on Dec 28 came to the decision to temporarily bar the entry of foreign nationals from all countries to Indonesia from Jan 1 to 14,2021, ” Retno said at the Presidential Palace in Jakarta on Monday.

Exceptions for foreigners due to arrive prior to Thursday, Dec 31 have also been put in place, based on the latest regulations set up by the national Covid-19 task force.

They must adhere to strict health protocols that include presenting negative results of a polymerase chain reaction (PCR) test taken at least 48 hours before departure to Indonesia, to be uploaded into the Indonesia Health Alert Card (eHAC) application.

Upon arrival, they will be required to take a reverse-transcriptase PCR test by the Indonesian authorities and be quarantined for five days at designated hotels if they test negative.

Foreign travelers must take another RT-PCR test after the quarantine period and will only be allowed to continue their journey if results come back negative.

Retno said that citizens returning from abroad would still be allowed entry but that they were expected to follow the same rigorous procedures as foreigners, although their expenses would be covered by the government.

The decision to close its borders is just the second time since the Covid-19 outbreak spread through the country, as Indonesia continues seeing a steady rise in positive cases nine months into the pandemic.

The nation has recorded more than 719,000 confirmed cases and upwards of 21,000 deaths from the disease, according to the official tally as of Monday.

The high positivity rate and a low testing capacity indicate that the true scale of the crisis could be much bigger. — The Jakarta Post/ANN