Thailand confirms 110 new coronavirus infections; 94 local cases and it is a rising headache

Images courtesy of the The Nation Thailand/Asian News Network

BANGKOK, Dec 26 (The Nation Thailand/ANN): Thailand on Saturday confirmed 110 new coronavirus infections, of which 64 were local infections and another 30 from foreign workers, connected to an outbreak in the southwest province of Samut Sakhon, the country's coronavirus worst outbreak yet.

Of the new infections, 30 were among migrant workers and 16 were imported cases, Taweesin Wisanuyothin, a spokesman for the country's Covid-19 task force, told a briefing.

Thailand has a total of 6,020 confirmed cases and 60 deaths.

18 were in Bangkok, 10 in Phetchaburi, seven in Samut Prakan, five in Chai Nat, four in Ratchaburi, three each in Nakhon Ratchasima and Rayong, two each in Saraburi, Chaiyaphum, Satun and Chachoengsao, one each in Ayutthaya, Pathumthani, Trang, Khon Kaen, Phichit, and Songkhla.

The new cases in quarantine facilities included two from Myanmar, four from Russia, three from the US, and one each from France, Turkey, the UK, Mozambique, India, Saudi Arabia and Germany. 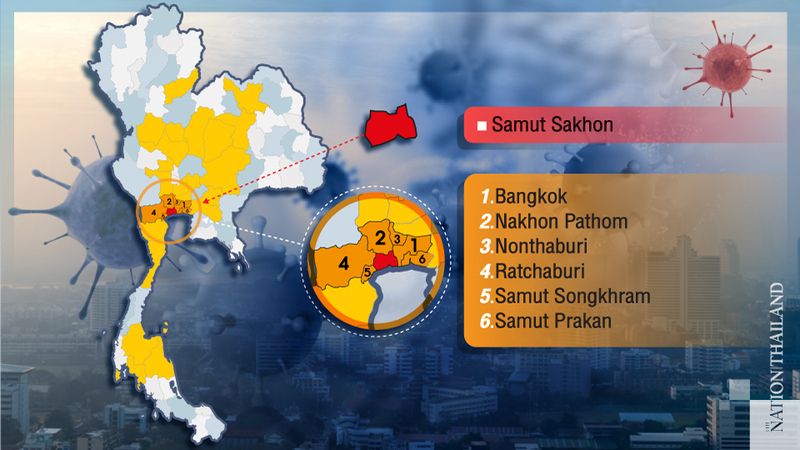 The (CCSA) had decided to colour code provinces as red, orange, yellow or green, depending on the level of coronavirus risk and the strength of measures taken in each province.

On Friday (Dec 25), the CCSA did not clarify the colour assigned to each province. However, based on several official updates on patient numbers, colour codes were assigned.

Of the 32 provinces where Covid-19 cases have been confirmed, the only one marked as red was Samut Sakhon.

Those in orange, pointing to more than 10 cases, were: Bangkok, Samut Songkhram, Ratchaburi, Nakhon Pathom, Nonthaburi and Samut Prakan.

The rest of the provinces were marked green to show no Covid-19 cases had been reported in the new wave of infections. - The Nation Thailand/Asian News Network