Philippines to get 30 million doses of India's Novavax vaccine

Despite consultations with numerous vaccine makers, the Philippines has so far signed only one supply deal, with the help of its private sector, to acquire 2.6 million shots of a vaccine developed by AstraZeneca.

"Thirty million dosages of the Indian-made Novavax vaccines are assured possibly with no cash advance. It will be available by July 2021," Foreign Affairs Secretary Teodoro Locsin said in an interview with CNN Philippines.

He said the information came from Serum Institute of India, the world's largest vaccine producer, and that the terms of the supply deal may be signed before the end of the year.

There was no immediate comment from the institute, which in August entered a supply and licence agreement with Novavax Inc for the development and commercialisation of its Covid-19 vaccine candidate.

Talks with Moderna, which has been granted emergency use authorisation by the US Food and Drug Administration, will begin next week, Locsin said.

With 459,789 infections and 8,947 deaths, the Philippines has recorded the second-highest number of Covid-19 infections and casualties in Southeast Asia after Indonesia. 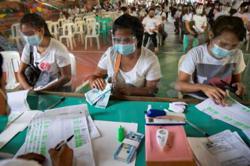