Pro-democracy protest leaders give offerings in front of the statue of King Taksin during an anti-government rally at Wongwian Yai in Bangkok on Sunday (Dec 6, 2020). - AFP

Disease Control Department director Dr Sophon Iamsirithaworn said a total of 23 Covid-19 cases including 11 in Chiang Rai, Chiang Mai (five), Bangkok (three), one each in Phichit, Phayao, Ratchaburi and Sing Buri have been linked to an entertainment outlet in Tachileik, since end of November.

"We are not in the second wave of Covid-19 as most cases were imported from neighbouring country (Myanmar). To date, at least two locally transmitted cases have been reported and we managed to track their close contacts,” he told a press conference here.

On Nov 28, a Thai woman who returned from Myanmar, and bypassed immigration checks and compulsory quarantine, was tested positive for Covid-19 days later.

Over the last 24 hours, 14 new Covid-19 cases have been reported including one locally transmitted case - a 26-year-old Thai woman working at an alternative state quarantine (ASQ) in Bangkok.

Meanwhile, Chiang Rai governor, Prajon Prachsakul said another nine Covid19 cases have been reported in the province but not included in today’s tally.

He said all new patients are Thai women, aged between 20 and 44, working at the same entertainment outlet in Tachileik and returned home via legal channels.

"All new patients live and work at the same venue with previous confirmed cases returning from Tachileik,” he said. - Bernama 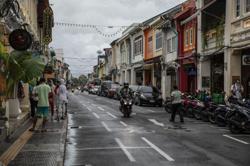