Standing proud: The national flag on the moon’s surface placed by the Chang’e 5 spacecraft. — AFP

BEIJING: The Chang’e 5 robotic probe has become China’s first spacecraft to bring the country’s national flag to an extraterrestrial body.

A small national flag was mounted on the multi-module probe’s lander and was erected before Chang’e 5’s ascender lifted itself into a lunar orbit.

The scene of the five-starred red flag against the dark sky on the greyish lunar surface was taken by a camera on the lander and then transmitted to ground control.

The system to raise the flag was designed and produced by engineers at China Space Sanjiang Group in Hubei province, a subsidiary of the state-owned China Aerospace Science and Industry Corp. It has three parts – a flag weighing 12g, an unleashing device and an unfolding instrument.

Ma Wei, the system’s project manager, said the system is exposed to a challenging environment on the lunar surface, so designers introduced multiple innovative designs and conducted many tests for reliability.

“For instance, the strong cosmic radiation and the extreme temperatures on the moon mean we could not use conventional fabrics.

“If we place an ordinary flag on the moon, its colours will quickly fade, ” he said.

“Designers spent more than one year selecting and testing ideal materials, and finally picked a new type of composite material that can resist the harsh conditions on the moon, ” he added. — China Daily/ANN 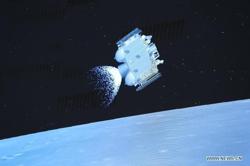