Covid-19 policy chief implementer Carlito Galvez, Jr, who is also the designated vaccine czar, said developing countries like the Philippines are now scrambling for the remaining supply of the vaccines.

"Eighty per cent of the global market has been taken by the rich countries. Now we are fighting for the 18 per cent because Covax has gotten the other (two) per cent," Galvez said during the online Kapihan sa Manila Bay forum.

He was referring to the Covax Facility, a global mechanism designed to guarantee rapid, fair, and equitable access to Covid-19 vaccines worldwide which the Philippines joined in July.

The former military general explained that the deals were made possible by advance market commitments with pharmaceutical companies.

"If we will not do the advance market commitment, we will be at the tail end of the supply chain," he said.

This is after President Rodrigo Duterte finally agreed to make advance commitments and advance payments to private vaccine developers to ensure supply for the Philippines despite expressing reservations in September due to the country's procurement laws.

Galvez said the government is currently in negotiations with other big pharmaceutical companies for potential vaccine deals.

Aside from AstraZeneca, the government is also looking into the vaccines of China's Sinovac Biotech, Russia's Gamaleya Research Institute, and Pfizer of the United States. - Philippine Daily Inquirer/Asia News Network 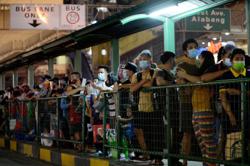