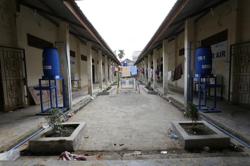 Rizieq's (centre) remarks came a day after he failed to show up at a police station for interrogation on the gatherings.- AFP

JAKARTA (The Straits Times/ANN): Firebrand Indonesian cleric Rizieq Shihab has apologised over recent mass gatherings in Jakarta which flouted health measures to control the coronavirus and sparked fears of fresh outbreaks in the capital.

His apology came amid uncertainty over whether he has tested positive for Covid-19.

The leader of the vigilante group called the Islamic Defenders Front, or FPI, was mobbed by thousands of supporters at the international airport when he returned from self-exile in Saudi Arabia on Nov 10. That same week, he also drew maskless crowds to celebrate his daughter's wedding and commemorate Prophet Muhammad's birthday.

He told a virtual forum of clerics on Wednesday (Dec 2) that he had cancelled plans for future gatherings and trips to the districts until the pandemic is over, adding: "I apologise that there was a build-up of people which went out of control... the followers were too enthusiastic."

His remarks came a day after he failed to show up at a police station for interrogation on the gatherings.

Police have issued a second summons for him to report on Thursday, after which they could detain him.

event in Jakarta, when thousands of his supporters gathered to attend the wedding and mark the Prophet's birthday.

He instead sent 38 lawyers to the Jakarta police station and one of them, Aziz Yanuar, told reporters that this was enough to fulfil the police summons.

He told the police that Rizieq needed rest as he had just been discharged from hospital. No doctor's affidavit on Rizieq's health was given to the police, a requirement for using a health reason for not fulfilling a summons.

Rizieq was hospitalised at Ummi hospital in Bogor between Nov 25 and Saturday for exhaustion and took a swab test, but the result of his test has not been reported to the Covid-19 task force, the agency that would have to carry out contact tracing if it is positive.

The task force has filed a police complaint against the hospital, which the government accused of not being cooperative when the task force wanted to administer a separate swab test on Rizieq. - The Straits Times/Asia News Network 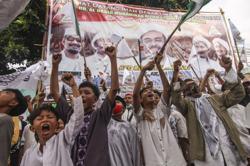 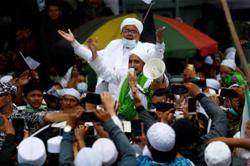