President Joko Widodo surveys the readiness of state-owned enterprises to produce a vaccine in his working visit to Bandung city, on Aug. 11, 2020. - Biro Pers Sekretariat Presiden/Kris

BANDUNG (The Jakarta Post/ANN): It may not be too long until Indonesia can start its Covid-19 vaccination program, as Indonesia's Food and Drug Monitoring Agency (BPOM) confirmed last week that emergency use authorization (EUA) could be granted before the clinical trials were complete.

While waiting for EUA to be granted, state-owned pharmaceutical holding company PT Bio Farma has started gearing up for the vaccination programme by developing a digital infrastructure.

The digital infrastructure is set to support both the government's vaccination programme and independently purchased vaccinations.

Soleh explained in a statement on Wednesday that the track and trace technology would feature 2D barcodes on the vaccine’s packaging containing important information, namely the vaccine’s expiry date, batch number and serial number, to prevent counterfeit vaccines.

For the programme, PT Bio Farma is also collaborating with state-owned telecommunications giant PT Telekomunikasi Indonesia (Telkom) to integrate the data with other ministries and agencies, such as the Health Ministry, Communications and Information Ministry, Health Care and Security Agency (BPJS Kesehatan) as well as the Indonesian Military (TNI) and the National Police (Polri).

The information will serve as a guide for distribution planning, vaccination services as well as to validate the vaccine recipients and monitoring system.

With regard to the distribution system, the infrastructure seeks to ensure that all vaccines are stored in a temperature-controlled system ecosystem that ranges between 2 and 8 degrees Celsius.

“With [this] digital solution, we can find out the vaccine's real-time position during delivery by using GPS and monitor the freeze-tag while the vaccine is being transported from PT Bio Farma to healthcare facilities,” said Soleh.

Soleh added that the digital infrastructure would give various benefits for consumers, which includes a pre-order service for independently purchased vaccinations. The pre-order facility will also prevent vaccine hoarding as it provides PT Bio Farma with vaccine requests in each area.

“Therefore, we can avoid irresponsible parties [who plan to hoard the vaccines],” he added.

As for the final phase, this digital solution also offers an integrated reporting system, which provides consumers with a report or digital certificate that can be used to travel by air or train.

As of Nov 26, state-owned pharmaceutical company PT Bio Farma was still waiting for the results of the phase three clinical trial of a Covid-19 vaccine produced by Sinovac Biotech for the vaccine to be authorised for public use.

“We are still [waiting for] efficacy data from the clinical trials to be reported, reviewed and approved by the Food and Drug Monitoring Agency (BPOM),” Bio Farma operational director Rahman Roestan said after a meeting with the BPOM on Nov 26.

However, BPOM head Penny Kusumastuti Lukito said emergency use authorisation (EUA) could be granted before the clinical trials were completed. - The Jakarta Post/Asia News Network 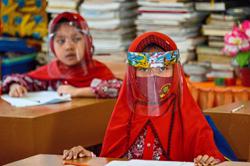