Among the fresh infections, 97 were locally transmitted, 15 of which were untraceable, Chuang Shuk-kwan, who heads the Centre for Health Protection’s communicable disease branch, said at a press briefing in the afternoon.

The city’s major infection clusters continued to grow. Thirteen new patients were linked to the dance cluster – the biggest cluster so far and involving 565 confirmed patients.

Another cluster that centered on a construction site in Lohas Park, a private housing project in Tseung Kwan O, saw 16 new patients, including 14 workers and two of their family members, according to Chuang. The group now has 19 patients.

A patient who once had a kidney dialysis at Hong Kong Sanatorium and Hospital tested positive for the coronavirus. The case was linked to a previous patient who required the same service at the hospital.

The woman was hospitalized on Oct 2 due to fever, vomiting and diarrhea and confirmed as infected, the Hospital Authority said in a statement. She tested negative after receiving treatment but later suffered a respiratory failure and succumbed to the disease.

More community treatment facilities set up at the AsiaWorld-Expo will start to receive patients on Thursday, providing a total of 500 beds, said Lau Ka-hin, chief manager of the Hospital Authority. He added that 360 patients have already been admitted to the exhibition centre’s facilities.

The Chinese Manufacturers’ Association of Hong Kong announced in a statement on Wednesday that this year’s Hong Kong Brands and Products Expo, originally scheduled from Dec 12 to Jan 4 at Victoria Park in Causeway Bay, will be postponed.

The expo is one of the city’s largest, oldest outdoor fairs of local products, which had attracted more than 300 brands to participate this year.

Victoria Park has been forced to close for at least two weeks as the government shut down public leisure venues to cope with the fourth wave. 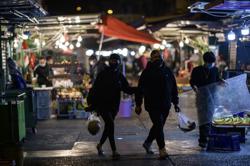