HONG KONG (AFP): Hong Kong reimposed social distancing measures at some of their strictest levels in the city since the start of the coronavirus pandemic on Monday (Nov 30), as authorities battle a fourth wave of infections.

The financial hub has maintained bans on large group gatherings for much of year and has shuttered various industries when cases have spiked.

The measures have helped keep infections to just over 6,000 in the city of 7.5 million with 109 deaths.

But daily cases have risen above 100 in recent days, prompting authorities to usher in stricter measures similar to those seen during waves in the spring and summer.

The city's 170,000 civil servants will work from home unless their job is considered essential and Lam asked private businesses to follow suit where possible.

The restrictions on public gatherings will be reduced to two people maximum, down from four, while restaurants will only be able to serve a maximum of two people per table.

Schools, bars and nightclubs have already been ordered to close.

But the new restrictions now include most other entertainment venues, such as karaoke rooms, amusement parks and mahjong parlours.

Gyms and beauty parlours can remain open but with stricter limits on people per venue or class.

Lam said fatigue had set in among Hong Kongers, a community that took the coronavirus seriously from the get go.

Authorities plan to increase the current HK$2,000 (US$260) spot fines and will launch a hotline for residents to report social distancing breaches.

Police will also play a more proactive role in stopping breaches and going after private venues hosting parties or large gatherings, she added.

One of the super-spreader events that helped caused the current wave was linked to ballroom dancing nights popular with many well-heeled residents.

"They went out in groups, they did not wear masks, they continued to enjoy themselves in parties," Lam said of the recent breaches.

"They danced in close contact... So we need to raise the fine." 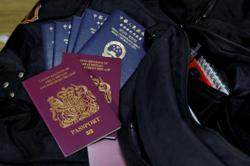