Plastic pollution has become one of China's biggest challenges. - Reuters

The Ministry of Commerce said it had established a nationwide system for retailers to report their plastic consumption as part of a trial scheme to encourage recycling.

Plastic pollution has become one of China's biggest challenges, with vast amounts buried in landfills or dumped in rivers. The rise in home food deliveries has also caused volumes to surge.

Wang Wang, chairman of the China Scrap Plastic Association, said the bans would "only resolve the most visible types of plastic pollution" and were just one part of the country's efforts to tackle waste.

From September, China has also prohibited some types of agricultural-use plastic film used to keep crops warm and moist.

Chinese farmers use around 1.5 million tonnes a year, but it leaves residues that damage the soil.

A new "solid waste law" also came into effect in September, raising fines tenfold for those who break rules and mandating the construction of new recycling infrastructure.

Though there have been complaints China is moving too fast, Wang said the business impact of the measures would be limited, with firms aware in advance that some products would be banned.

Antoine Grange, chief executive for recycling at SUEZ Asia, said the bans were welcome but China would also need to improve its entire recycling capability.

"The single-use plastic ban is good for education, good for awareness, but it is only part of the big picture," he said. 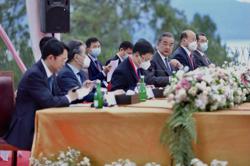