A silhouette of the skyline is pictured at sunset in Quezon City, Metro Manila, Philippines. The Department of Health (DOH) of the Philippines on Sunday (Nov 29) reported 2,076 new confirmed cases of Covid-19 infection, bringing the total number in the country to 429,864, - Reuters

MANILA, Nov 29 (AP): More than 30 companies in the Philippines signed an agreement to purchase at least 2.6 million vaccine doses from AstraZeneca in the country's first such deal to secure coronavirus vaccines.

They plan to donate a large part of the doses to the government for its planned vaccination program and use the rest to inoculate their employees, business officials said.

Business leader Jose Concepcion III said the vaccine is expected to be delivered in the second quarter of next year and would cover about 1 million people, but did not disclose other details.

The purchase would be crucial in restoring business confidence that has been shattered by months of the pandemic and lockdowns, he said.

"We want an end to this nightmare and this is the best alternative we have,” Concepcion told an online news conference after the signing, describing it as an opportunity to open up the economy again.

The Philippine government says it’s targeting about 60 million Filipinos to be vaccinated against the coronavirus over about two years starting next year.

The action, at a cost of more than 73 billion pesos (US$1.4 billion) is aimed at developing immunity in a majority of the population. The Philippines has recorded 425,918 confirmed cases of the coronavirus, including 8,255 deaths.

Meanwhile, the Department of Health (DOH) of the Philippines on Sunday (Nov 29) reported 2,076 new confirmed cases of COVID-19 infection, bringing the total number in the country to 429,864, reports Xinhua.

The DOH said 10,579 more patients recovered, raising the total number of recoveries to 398,624. The death toll climbed to 8,373 after 40 more patients died from the viral disease, the DOH added.

Philippine President Rodrigo Duterte will announce on Monday whether to retain or ease the lockdown restrictions in the capital Manila and other regions in the country.

Interior Secretary Eduardo Ano told radio DZBB in an interview that the coronavirus task force will meet Duterte on Monday to brief him on the Covid-19 situation. Duterte will make a statement after the meeting, he added.

Earlier this month, Duterte placed Metro Manila and six other areas under general community quarantine restrictions from Nov. 1 to Nov. 30 to contain the spread of the virus.

Ano said that the task force will likely endorse the recommendation of Metro Manila mayors to retain the strict measures during the holiday season.

"There are concerns about the possibility of a surge of infections if the quarantine measures are relaxed. People will party and do traditional activities like caroling," Ano said.
Article type: metered
User Type: anonymous web
User Status:
Campaign ID: 18
Cxense type: free
User access status: 3 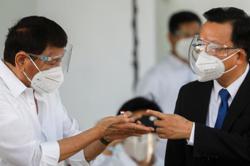