HONG KONG, Nov 28 (SCMP): When Cambodia and China announced in August that they had negotiated a free-trade agreement (FTA) in just under a year, some analysts said it was a sign Beijing would further cement its economic influence on the Southeast Asian nation – even as Phnom Penh was engaged in other efforts to diversify its trade game and seek new partners.

Since overtaking Japan as Cambodia’s biggest aid donor in 2010, China’s influence in the country has grown steadily through an influx of investment, workers and tourists. It now supplies about 40 per cent of Cambodia’s foreign direct investment and holds half of its public external debt, valued at US$7 billion in 2018, according to World Bank figures.

China has also overtaken the European Union as the largest importer of Cambodian rice, and the FTA came with pledges from Beijing of US$140 million in loans and grants for infrastructure projects.

Given the economic impact from the coronavirus pandemic on many countries in the Association of South-East Asian Nations (Asean), analysts have pointed to the need for its members – including Cambodia – to diversify away from China and tap into global supply chains.

Yu Hong, a senior research fellow at the East Asian Institute of the National University of Singapore, wrote in ThinkChina, an English language e-magazine with a China focus, that as global supply chains realigned in the wake of the crisis, South-East Asian countries should implement bold domestic reforms, develop their manufacturing sectors and grow supporting industries.

To that end, Cambodia is in FTA negotiations with South Korea and the Eurasian Economic Union, which is made up of Belarus, Armenia, Russia, Kazakhstan and Kyrgyzstan. 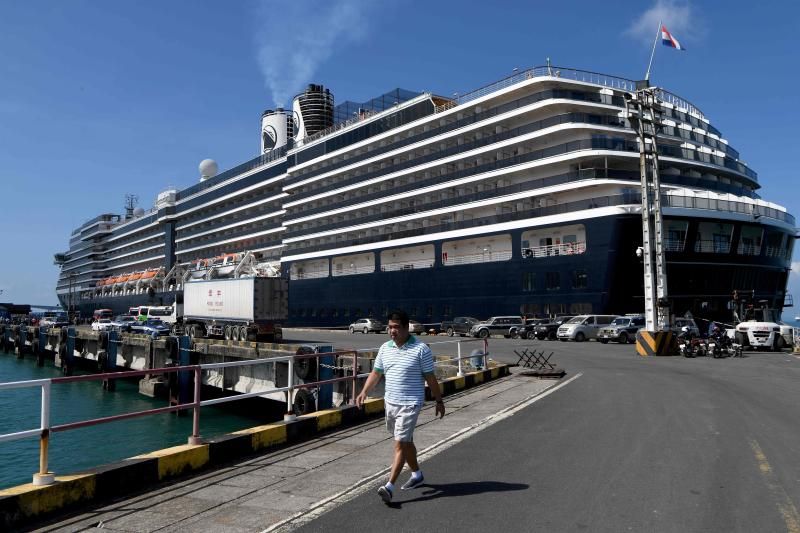 The Sihanoukville Autonomous Port in Cambodia, which handles much of the country’s container traffic. - AFP

The government held its fourth round of trade talks with South Korea last week, focusing on general trade rules, customs clearance, market access and other issues. Even though the first round of negotiations took place in July, both sides hope to finalise a draft agreement as soon as the end of the year.

Plans are also under way to begin FTA negotiations with Britain, the United States, Japan, Mongolia and India, with at least eight working groups set up by Cambodia to study, negotiate and formulate its overall FTA strategy, according to local media reports.

In comments to the local media this May, commerce minister Pan Sorasak said having more FTAs would not only improve the country’s competitiveness and strengthen its trade-diversification strategy, they would also better integrate Cambodia into the regional and global economies.

Virak Ou, president of Future Forum, a Phnom Penh-based think tank dedicated to public policy issues, said having more FTAs would allow Cambodia to broaden itself economically and help it reduce its reliance on China, the US and Europe, as well as integrate the country’s production more closely with the global supply chain.

According to the European Commission, the EU was Cambodia‘s second-largest trade partner last year, while the US remains Cambodia’s largest single export market, with a total value of US$3.8 billion in 2018, according to the United States Trade Representative.

“I am expecting a further push for stronger partnerships with countries like Japan and South Korea. Politically, they are much more neutral than China and America, ” Ou said, adding that Japan was seen as an important investment partner because it could help counter China’s influence.

“The FTA with Japan is within reach, ” he noted, adding that India could also be an important country for Cambodia “in the very long term”, but that negotiations with New Delhi “could be dragging”. 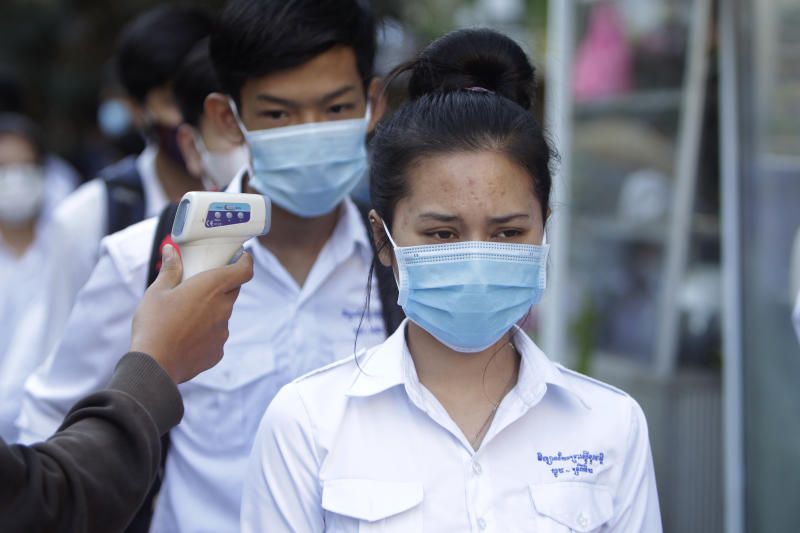 Students have their temperature checked to avoid the contact of coronavirus before their morning classes at Preah Sisowath high school, in Phnom Penh. - AP

However, Sovinda Po, a senior research fellow at the Cambodian Institute for Cooperation and Peace and a PhD candidate at Australia’s Griffith University, said Cambodia’s focus in negotiating FTAs with other countries was to diversify its trading partnerships in the wake of the EU reducing trade privileges – and not to reduce its economic reliance on China.

Po was referring to how the EU in August officially suspended 20 per cent of Cambodia’s duty- and quota-free access to its market that the country had enjoyed under the Everything But Arms (EBA) arrangement, which the EU offers to the world’s least developed countries.

The EU made the move for what it said was the Cambodian government’s crackdown on human and labour rights. This resulted in tariffs being applied to Cambodian exports such as garments, footwear and sugar, when they were previously subject to zero duties.

Po added that there was also the threat of the US revoking Cambodia’s duty-free trade privileges under the Generalised Scheme of Preferences (GSP) framework, which is aimed at promoting economic development in less developed countries by eliminating duties on thousands of products.

Last week, eight US lawmakers wrote to Secretary of State Mike Pompeo to call on the outgoing Trump administration to impose targeted sanctions against senior Cambodian officials over human rights violations and look into revoking the country’s trade privileges.

But the president of the American Chamber of Commerce in Cambodia, Allen Dodgson Tan, said it would be “a grave mistake” for the US to revoke GSP privileges for Cambodia, given that bilateral economic trade served as “a balancing force in the ongoing competition for influence in Cambodia, and in the region”.

“While the US has historically had fewer infrastructure-based projects to offer, our economic contribution to the development of the kingdom continues to be essential for the manufacturing sector, ” Tan said, adding that American contributions to the Cambodian economy were well known and appreciated by Cambodians.

US Census Bureau data showed that Cambodian exports to the US market rose 23 per cent to US$2.75 billion in the first half of this year, from US$2.24 billion in the same period last year. The growth came on increased shipments of travel-related products such as handbags, backpacks and suitcases, which were granted preferential tariffs under an amendment to the GSP that came into effect in July 2016.

While having more FTAs was likely to reduce Cambodia’s economic reliance on Beijing, China’s status as Phnom Penh’s largest investor, trading partner and donor was expected to remain, said Po from the Cambodian Institute for Cooperation and Peace.

Total trade between Cambodia and China has grown steadily, expanding 27.7 per cent to US$9.43 billion from 2018 to 2019, according to figures from China’s Ministry of Commerce.

As for negotiating FTAs with the US, Britain and Japan, Po said significant obstacles remained, since these more advanced economies demanded higher standards of transparency and accountability. To meet the standards, he said, Cambodia not only needed to improve the quality of its goods but also address issues such as corruption.

One thing analysts agree on is that establishing more FTAs with countries within and outside Asia is essential for Cambodia’s long-term economic growth. 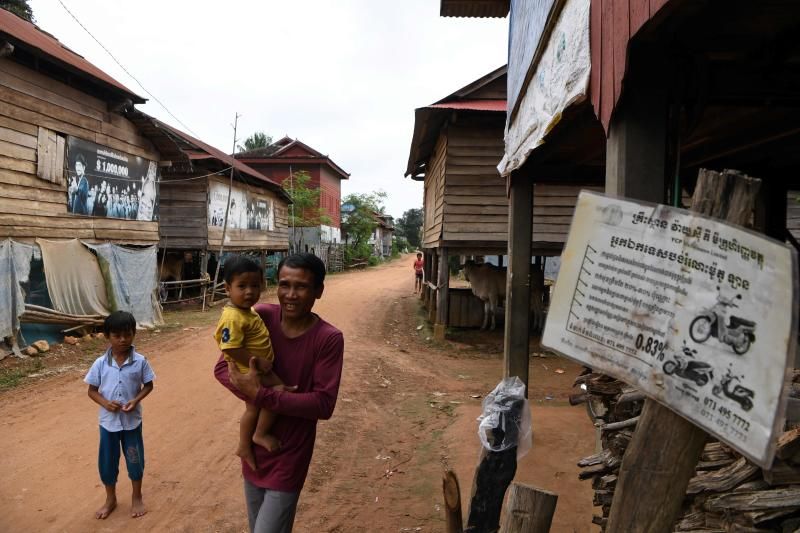 Cambodia especially needed bigger markets for its agricultural produce, Po said, adding that some of those products were already exported to Thailand and Vietnam, where they were processed and re-exported to “more expensive markets” such as Japan, South Korea, the EU and the US.

“If Cambodia is able to sign more FTAs... it can diversify its markets and export directly to these markets, ” he said. “It can also open up more investment opportunities for both local and foreign investors in the agricultural sector.”

Ou of Future Forum said the most crucial FTAs would be those with the key markets of Europe and the US, adding that Brexit gave Cambodia the opportunity to establish a separate trade agreement with Britain. However, reaching a similar agreement with the US might be more difficult, he said.

AmCham’s Tan noted that American investors would be happy to see any FTAs that resulted in an increase in exports from Cambodia to other nations, including free access to the Chinese market, because “improved market access for Cambodian goods will increase investment in factories and create new jobs”.

US-Cambodia ties have come under pressure in recent months over the demolition of a US-built facility at a naval base in Ream, fuelling speculation that Phnom Penh plans to host China’s military at a time of growing Sino-US tensions.

However, the Cambodian government has repeatedly denied reports it has reached a secret deal to let Beijing place forces at the base.

Washington is also wary of the Chinese-invested US$3.8 billion Dara Sakor investment zone, which has plans for an international airport, a deepwater seaport and industrial estate, along with a resort complete with power stations and water-treatment plants.

Comprising 20 per cent of Cambodia’s coastline, the size of the project has prompted concerns in the US that it is part of a larger Chinese plan to base military assets in Cambodia and expand China’s strategic foothold in South-East Asia. - South China Morning Post