WASHINGTON, Nov 28 (Bernama): A federal appeals court in the US state of Pennsylvania on Friday upheld a previous ruling by a lower court against the campaign of President Donald Trump, dealing another blow to the president's effort to overturn election results in the state, Xinhua news agency reported.

The three-judge panel of the Third US Circuit Court of Appeals in Philadelphia determined that the Trump campaign's claims of widespread voter fraud in the state "have no merit," according to the court's opinion.

"Free, fair elections are the lifeblood of our democracy," Judge Stephanos Bibas, a Trump appointee, wrote in the 21-page opinion. "Charges of unfairness are serious. But calling an election unfair does not make it so. Charges require specific allegations and then proof. We have neither here."

The campaign's lawsuit alleged that some counties in Pennsylvania allowed mail-in voters to fix problems with the ballots by casting provisional ballots.

Brann said in a scathing opinion the lawsuit provided "strained legal arguments without merit and speculative accusations, unpled in the operative complaint and unsupported by evidence."

The judge appointed by former President Barack Obama said he could not find any case in which a plaintiff "has sought such a drastic remedy in the contest of an election."

In response, Trump said on Twitter the ruling was "all a continuation of the never ending Witch Hunt," adding that Brann "would not even allow us to present our case or evidence." Brann didn't allow the campaign to file an amended complaint, which led to the campaign's appeal.

"The Campaign never alleges that any ballot was fraudulent or cast by an illegal voter," wrote Bibas, the Third Circuit's judge. "It never alleges that any defendant treated the Trump campaign or its votes worse than it treated the Biden campaign or its votes. Calling something discrimination does not make it so. The Second Amended Complaint still suffers from these core defects, so granting leave to amend would have been futile."

The campaign reportedly is going to appeal the case to the US Supreme Court. 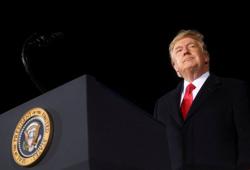