The Eye of East Lake Ferris wheel is seen in the foreground of the lake in Wuhan, Central China's Hubei province, on Aug 17,2020. - Xinhua

In the first three quarters, the added value of industries above designated size (output growth of industries with annual revenue of 20 million yuan (S$4 million) or more from their main business operations) increased for five consecutive months, with a growth of 6.2 per cent in September.

The decline in fixed asset investment narrowed by 22.3 per cent in the first nine months, thanks to the double-digit growth for three consecutive months.

The four sectors hardest hit during the pandemic -- wholesale, retail, accommodation and catering - have registered a slower decline.

Actually, the catering sector has achieved positive growth due to the revival of consumption and market.

Also, in the first three quarters, local taxes accounted for 77.7 per cent of the general public budget revenue, up 1.8 per cent year-on-year; total import-export volume increased by 6.8 per cent year-on-year, 6.1 percentage points more than the national average; and 1,219 new enterprises above designated size were registered.

The above figures show Hubei's economic recovery has been solid.

Despite the short-term slowdown due to the novel coronavirus epidemic, the rising economic graph of the province in Central China is not likely to change, especially because it enjoys some unique advantages.

To begin with, its location at the centre of China and connectivity with the eastern, western, southern and northern regions give Hubei a unique geographic advantage.

With high-speed railways crisscrossing the country, it usually takes a person about 4.5 hours to reach any of the 26 top cities in the country from Wuhan.

As the Yangtze River flows through the province, Hubei enjoys connectivity through rail, road, air and river with all parts of China.

And the under-construction Shunfeng airport will make Wuhan the top air cargo distribution centre in Asia. In fact, Wuhan is about to become a "dual hub" of air passengers and cargo.

Hubei is also rich in scientific and educational resources, as it is home to 2,158 scientific research institutes and 129 colleges with over 1.5 million students.

A batch of competitive industrial clusters like automatic manufacturing, integrated circuits and bio-medicine thrive in the province, with 15 industries' assets reaching the 100 billion yuan mark. In particular, optoelectronic and medical industries have developed at a rapid pace in recent years.

Further, Hubei, as a major province in Central China, is expected to make great achievements through the "dual circulation" development pattern.

Given the emergence of anti-globalisation, unilateralism and protectionism in many parts of the world, China faces strong headwinds in global trade.

That's why the Fifth Plenary Session of the 19th Communist Party of China Central Committee last month stated that it is necessary to focus more on the domestic market to boost economic growth.

By the end of 2019, Hubei had about 59.27 million permanent residents, 7 million more than the total population of the Republic of Korea.

During the 14th Five-Year Plan (2021-25) period, Hubei will embark on a new journey to develop itself into a modern province, serving as a fulcrum for the rise of the central region and spearheading its economic transition. To meet these goals, the province has to make greater efforts on several fronts.

First, Hubei needs to make full use of its advantages such as geographical location and big market while seizing the opportunities created by the "dual circulation" development paradigm to boost its economy and contribute to the rise of the central region.

Second, Hubei should make innovation a main driver of economic upgrading. As the fifth plenary session said, an innovation-driven development model should be followed to develop new advantages.

Traditional industries still make a major part of Hubei's economy; it has less than 7,900 high-tech enterprises, one sixth the number in Guangdong province.

So in the next five years, Hubei should promote innovation-oriented enterprises, increase research funding, give more emphasis to the real economy and modernise its industrial chain, in order to develop into a modern province led by high-tech and innovation.

Third, the province should build a market-oriented, law-based and world-class business environment that is stable, and promotes creativity, equality and transparency, and reduce administrative intervention in the market.

Fourth, Hubei should make good use of the central government's preferential policies in the post-pandemic era to drive growth.

And fifth, the province should strike a balance between economic growth and pandemic prevention and control because, with the novel coronavirus pandemic still raging in many parts of the world, China should try its best to prevent any large local outbreaks. 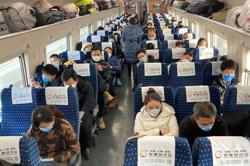