HANOI (Vietnam News/ANN): Last-minute legal wrangles notwithstanding, Joe Biden is expected to be sworn in as the United States’ 46th President on Jan 20,2021. In the West, the election of a moderate political veteran has been resoundingly welcomed as a cool breeze to temper the “fire” that marked the Trump years.

Asia’s take on this regime change has been a little more ambivalent – and particularly so in Vietnam, it seems.

Over the past four years, my adopted country experienced what commentators called Trump’s “bipolar” approach. On the one hand, his tough stance on China was in many ways beneficial to Vietnamese industry, prompting enormous amounts of manufacturing to shift to these shores.

On the other, Trump’s withdrawal of the US from what has evolved into the Comprehensive and Progressive Agreement for Trans-Pacific Partnership (CPTPP) was a heavy blow indeed.

Similarly, while he chose Hanoi as the location for his historic meeting with North Korean leader Kim Jong-un and took a hard line on Chinese incursions into the South China Sea (called East Sea in Vietnam), Trump also cast huge aspersions on Vietnam’s trade and currency policies while seemingly wanting to deepen ties.

As did much of the world, it felt extremely difficult to know where we really stood. Perhaps that was strategic on his part, and the key to his many (largely unsung) successes, but I’ll leave that to historians to pick over.

Interestingly, although Trump was a hugely polarising figure in the West, polls show he proved to be a remarkably popular one in Vietnam (and among Vietnamese Americans too).

Now, with this “strongman” soon to depart, we are left wondering whether Biden and his policy decisions will prove to be a boost to Vietnam – and fulfil his supporters’ hopes as “Leader of the Free World”.

My guess is that he will deliver on both counts, only without the bombast and uncertainty that came along with his predecessor.

The main reason is that the US – irrespective of party politics – now views Vietnam as a crucial player in Asia-Pacific, adding it to the Quad Plus security group earlier this year. We can therefore expect continuity from President Biden, particularly it was during his tenure as Vice-President under Barack Obama that relations between the US and Vietnam really started to warm.

The close-run nature of the US election means that Biden cannot afford to undermine many of Trump’s most impactful messaging, much of which was focused on tackling the aggressive ascendancy of China in both economic and military terms.

Though Biden’s style may differ, most expect that on certain hot-button issues his velvet glove will conceal an iron fist, as the saying goes. He will, however, be picking his battles very carefully as the Western world stares into the economic abyss engendered by Covid.

I can see him vigorously confronting human rights abuses and environmental challenges, but simultaneously extending olive branches of peace when it comes to trade.

The huge “Biden bump” in the markets signals that the world thinks so too.

One hopes that the same spirit will see him quietly drop the investigations into alleged Vietnamese currency manipulations started under Trump, and maybe even the resurrection of some new version of a transatlantic trade partnership.

That, however, may be a little too optimistic. As political commentators rightly point out, whatever the impression Trump gave, the US is very much ruled by committee – and President Biden’s Democrats could be hamstrung in much of what they want to enact by there being a Republican-led Senate. It is difficult to overstate just how divided a nation, and political machinery, President Biden inherits.

When it comes to Vietnamese-US relations, much depends upon who he appoints to key roles like Secretary of State – not to mention how the pandemic continues to play out and the socio-political buttons those consequences press. We must not forget that although the virus is beaten here, it continues to rage in the US.

Overall, however, I think we can look forward to a presidency that largely smiles on Vietnam and its growing stature in the world.

Indeed, Vietnam could play a key role in the development by Asean nations of a maritime code of conduct that will head off tensions in the South China Sea – a move that many see the US supporting behind the scenes.

As ever, geopolitics will remain a complex web of competing and shared ambitions to be navigated, and I think the world – and Vietnam – will find cause to celebrate a steadier hand steering the global ship. For all the world’s changes, that is still what the president does.

At the least, we won’t need to wonder where we stand in his eyes quite so much anymore. After so much tumult, I for one would welcome quieter style of international politics for a change. - Vietnam News/Asia News Network 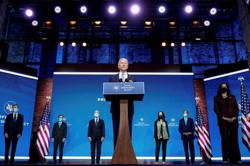