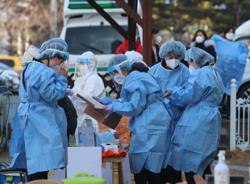 Posters on precautions against the coronavirus are displayed at a subway station in Seoul, South Korea, on Nov. 24, 2020. - AP

SEOUL (Reuters): South Korea reported 583 new coronavirus cases on Thursday (Nov 26), the highest since March, as the country grapples with a third wave of infections that has forced it to reimpose tough social distancing measures.

The daily tally exceeded 500 for the first time since March 6, according to the Korea Disease Control and Prevention Agency (KDCA), when South Korea battled the first major Covid-19 epidemic outside China.

The first wave emerged from meetings of a religious sect but most of the latest cases are occurring in offices, schools, gyms and small gatherings in the wider community around Seoul, making them harder to trace and contain.

"Covid-19 has arrived right besides you and your family," Health Minister Park Neung-hoo told a televised meeting of health officials.

Health authorities have warned the current wave might be tougher to control than earlier infections as most of the second wave has occurred in offices, schools, gyms and small gatherings in the wider general community around Seoul.

Park also expressed concerns that the rate of confirmed patients in their 20-30s had spiked to 28 per cent of total cases over the past month.