SINGAPORE, Nov 26 (The Straits Times/ANN) - Singapore's manufacturing output dropped for the first time in three months in October, with only the biomedical and precision engineering clusters seeing growth.

Factory output fell 0.9 per cent year on year, after a revised 25.6 per cent jump in September and a 16.4 per cent rise in August, according to data released on Thursday (Nov 26) by Singapore's Economic Development Board.

Economists had expected a 6.2 per cent increase, according to the median in a Reuters poll.

On a seasonally adjusted month-on-month basis, output shrank 19 per cent.

Transport engineering, led the output decline with a 31.8 per cent year-on-year plunge.

EDB said in a statement that levels of activity in aerospace firms and shipyards remained low as new orders were adversely impacted by travel restrictions and a weak global oil & gas market.

Overall, output at the transport engineering cluster has plunged by 24.9 per cent in the first ten months of 2020 compared to the same period last year.

However, the electronics cluster's output is still up by 7.1 per cent year on year in the first ten months of 2020.

General manufacturing contracted 12.8 per cent in October on a year-on-year basis, with all segments recording output declines.

The biomedical cluster grew 10.2 per cent year on year, cooling from the 91.2 per cent output surge it enjoyed in September. Without the biomed segment, overall manufacturing in October would have dropped by 2.7 per cent.

Precision engineering output also increased, by 10.6 per cent in October compared to the same period a year ago.

Within the cluster, the machinery & systems segment grew 16.8 per cent with higher output of industrial process and semiconductor equipment.

In contrast, the precision modules & components segment declined 3.5 per cent on account of lower production in dies, moulds, tools, jigs and fixtures. Overall, the precision engineering cluster grew 11 per cent from January to October 2020, compared to the same period a year ago. 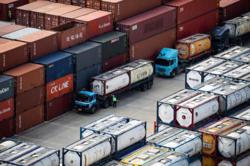