SINGAPORE (The Straits Times/ANN): Singapore has begun importing frozen shrimps from Saudi Arabia, the first time it is doing so from the Middle Eastern kingdom, part of its efforts to diversify its supply chains to safeguard food security.

The move could spark greater trade between the two countries as they start looking at the products available on both sides, said Minister for Trade and Industry Chan Chun Sing at an event to mark the trade in shrimps on Wednesday (Nov 25).

He said: "Prior to this, I think very few of us would have thought of importing shrimp from Saudi Arabia. It is not something that comes to mind. But now that we know this can be done, and it can be done in a very price-competitive manner, then we can explore with the Saudi embassy and suppliers on what other products they can offer.

"Likewise, these Saudi suppliers have also seen the products available in both Singapore and the region, which they could also bring back to Saudi Arabia. So that's how the nature of the trade flows continues to improve, and as we go along, the price of the logistics will continue to come down, because people become more efficient."

Managing director of The Seafood Company Kenneth Chua told reporters at the event held at a FairPrice outlet in VivoCity that around 60 tonnes of shrimps have been imported so far, with another 60 tonnes expected to be here by the end of the year.

The shrimps, which are sourced from the Red Sea, are currently supplied to FairPrice as well as other restaurants and foodstall owners.

Seah Kian Peng, group chief executive of FairPrice Group, said that Singapore's prawns are imported from all over the world. This includes nearer countries such as Thailand, Malaysia and Indonesia, and places as far as Canada and Ecuador.

"This shows that we continue to diversify our sources so that any point in time, there will be minimal, hopefully no disruption to supplies. At the same time... consumers can look forward to something which is (competitive) in terms of taste, quality and price," he said.

The Red Sea shrimps are being sold at $13.90 for 800g. They are priced at a premium as they are known for their rich flavour, thanks to the Red Sea's high salinity compared to the seawater in other parts of the world.

Other types of frozen shrimp sourced from places like Vietnam and China are being sold at around $10 for 1kg.

Singapore currently imports food from more than 170 countries and regions.

Chan said on the sidelines of the event that Singapore is constantly on its feet in diversifying its food supply chains. 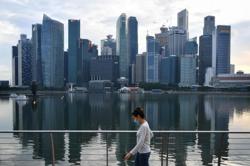