As of Monday, the city’s total tally stood at 5,701, with 108 related deaths. Separately, more than 70 people have tested positive preliminarily, according to health authorities.The resurging pandemic is mainly linked to 21 dance clubs scattered across Hong Kong. According to the Centre for Health Protection of the Department of Health, so far 132 confirmed patients, including 50 of them confirmed on Monday, were linked to the dancing cluster, the largest cluster since the pandemic struck in January.

Facing the spike in new cases, the government issued a mandatory testing notice for the first time, requiring anyone who had visited any of the 21 dancing venues between Nov 1 and 21 to undergo a virus test before Nov 24.

Anyone who fails to comply with the mandatory testing notice will face a fixed HK$2,000 (RM1,054) penalty. Violators will be given a testing order and those who fail to comply will be liable to a HK$25,000 (RM13,178) fine and imprisonment for six months.

Dr Leung Chi-chiu, chairman of the advisory committee on communicable diseases of the Hong Kong Medical Association, on Monday proposed to suspend on-campus classes, resume practices of working from home, and close entertainment venues and sports facilities, measures seen as effective ways to contain the virus at the height of the city’s last wave of the pandemic in July.

Due to the surge of new infections in Hong Kong, the city and Singapore postponed the world’s first quarantine-free travel bubble for two weeks. Inaugural flights between the two places, originally scheduled to depart on Sunday had been delayed. — China Daily/ANN 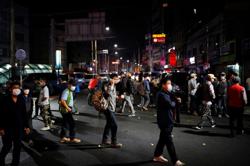