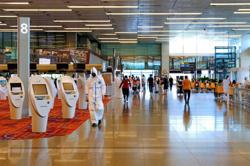 TRAVEL bubble flights under the Singapore-Hong Kong arrangement has been postponed, Secretary for Commerce and Economic Development Edward Yau said, adding that the two governments will announce early December as to when the flights will start.

Flights were originally scheduled to start from today, but has been suspended as the pandemic in Hong Kong escalates.

Under the original deal announced in mid-October, the bubble flights will be suspended for two weeks if the seven-day moving average of the daily number of unlinked local Covid-19 cases is more than five for either Singapore or Hong Kong.

The moving average for the territory on Friday was 2.14 but the number of new infections yesterday – crucial in determining if the threshold of five is crossed – shot up to 43, of which 36 are local and 13 are untraceable. This brings the total tally to 5,560 and 108 deaths.

Yau yesterday said it was a mutual agreement to delay plans by two weeks “for the Hong Kong (Covid-19) wave to settle a bit” which is the responsible thing to do and also to adhere to the conditions set out under the deal.

As for the passengers affected, there are the usual arrangements for refund by the travel agents or airlines, he said.

Cathay Pacific was reported by local media to say passengers can opt for a refund or reschedule their flights at no cost.

Singapore Transport Minister Ong Ye Kung said in a Facebook post yesterday that airlines will be contacting the affected passengers.

“I can fully understand the disappointment and frustration of travellers who have planned their trips. But we think it is better to defer from a public health standpoint, ” Ong wrote.

“This is a sober reminder that the virus is still with us, and even as we fight to regain our normal lives, the journey will be full of ups and downs. But we will press on and look forward to when we can safely launch the (air travel bubble).”

Hong Kong added 26 confirmed cases as of Friday, sparking worries that the travel bubble deal would be scuppered.

The Hong Kong Tourism Commission on Friday said the travel bubble can be adjusted any time by increasing or reducing designated flights, or suspending them.

If the threshold of five is breached, the travel bubble “will be suspended in two days’ time (including the day on which the figure was announced) for two weeks”. — The Straits Times/ANN